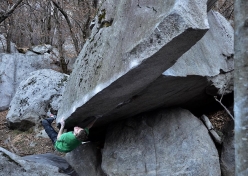 Giuliano Cameroni making the first ascent of the 8B+ boulder problem IUR at Cresciano in Switzerland, February 2018
Photo by Samuel Ometz 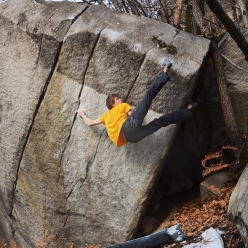 Swiss boulderer Giuliano Cameroni has made the first ascent of a series of quality boulder problems in the Ticino region of Switzerland. One of the highlights is IUR, a 8B+ described as one of the best in Cresciano.

During the winter months ace Swiss rock climber Giuliano Cameroni has made a flurry of first ascents throughout Ticino in Switzerland, demonstrating once again that he is one of the most active in the region. While all are described as being top-notch quality lines, two in particular at Cresciano are worth taking a closer look at.

The first, climbed in late December, tackles a line above the famous La Proue that involves a bizarre double-toe-hook; graded 8B by the 20-year-old, Great escape was repeated shortly afterwards by Samuel Ometz who confirmed the beauty of the moves.

The second problem tackles the stunning prow just above the trail leading to La nave va. Called IUR by the 20-year-old, it has been repeated by Ometz once again who confirmed the 8B+ grade, making it one of the most intense problems at this world famous bouldering area. More importantly though, it is one of Cameroni’s all-time favourites, indicating the absolute beauty the line.

Asked why one of the most obvious lines in the forest hadn’t been climbed before, Cameroni told planetmountain.com "Now that it's done it looks like the most obvious line, but back in the days it was hard to imagine it because the landing was catastrophic. Four years ago Markel Mendieta from Spain came to Cresciano and built a huge but sketchy landing with old logs. I remember we tried it together and although we did the moves it was still somehow too intimidating for us. Now that it's done it's for sure one of the best!"

Cameroni thanks S.C.A.R.P.A. , prana and FrictionLabs and Peter Bouldering for the support