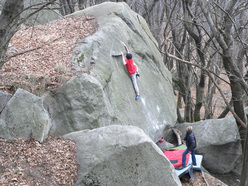 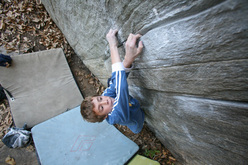 Giuliano Cameroni, born in 1997 in the Canton Ticino, Switzerland
Photo by archivio Cameroni

In mid February Giuliano Cameroni managed to free "Cruel", a new boulder problem at Cresciano's Tribuna centrale sector, above the famous "Prua Tresch". As can be seen from the photo, the problem is a beautiful smooth slab with an obvious sloper in the middle.

The problem ahd been attempted in the past by other climbers but it was young Cameroni who sent the problem first, suggesting a difficulty of FB8A+.

This is Cameroni's second FB8A+ first ascent, after Kingda Ka at the Gotthard Pass last September. It is worth noting that Cameroni was born in 1997... clearly he's another youngster we've got to keep our eyes on.

Fontainebleau (France)
Duel, 8a
Lucifer, 7b