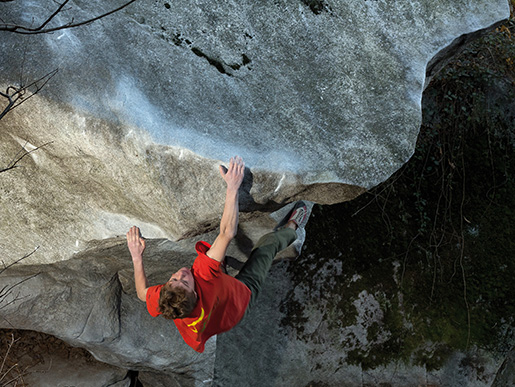 The start of the new millennium. These were the years of Dreamtime and the news about a new level in bouldering (8c, later downgraded to 8b+) at the hands of strong Swissman Fred Nicole quickly travelled around the world; Cresciano became increasingly popular and it was no longer known only by a select few, but it became a household name,

Dreamtime was a milestone not only in the history of Cresciano, but probably also in the history of bouldering. Reaching this important new level of difficulty attracted many boulderers, all desiring to attempt this new grade; Graham, Sharma and Ondra are only three of the countless talented climbers who travelled to Cresciano to rise to his, and other, challenges. Nowadays Dreamtime is no longer the hardest boulder problem in the world, but its name will forever remain etched in the memory of bouldering.

In the meantime the bouldering area at Cresciano has developed, consolidated and transformed into a world reference point. The number of problems has increased enormously and every year, in the right season, thousands of climbers flock to Cresciano from all over the world, helping to maintain and promote this sport.

Cresciano is a great place for day visits, short holidays or even longer trips, either alone or with the family (there are no real dangers in the central sector and secondary areas). The mild climate makes climbing possible almost all year round. It’s easily accessible (to the joy of many climbers) and the surroundings are very beautiful, allowing for many other outdoor sports and cultural activities. It is for all these reasons that we feel there's no point introducing Cresciano even more. Cresciano is, quite simply, Cresciano.

The great quality granite (Gneiss) provide a wide variety of styles: from slabs to overhangs past crimpy vertical faces. The climbing style is usually technical, but for a whole series of problems good finger strength is required. The very rough rock provide good friction, but it rapidly wears out the skin.

The bouldering area at Cresciano isn't on public ground, for this reason it is obvious that a compromise has to be found to accommodate both the climbers and the local inhabitants. We remind you that it is strictly forbidden to start open fires. Camping in the area is not allowed. No trash, tape or cigarette buts must be left behind. Dogs have to be kept on a leash. You have to find a discrete place for your physiological needs. You should avoid yelling and screaming that could disturb the people who live nearby.

The best time to climb at Cresciano is from September to April.