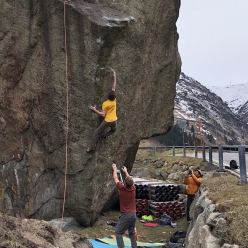 Giuliano Cameroni and Nalle Hukkataival Deal With the Devil in Switzerland

At Göschenen in Switzerland Giuliano Cameroni and Nalle Hukkataival have made the first ascent of the highball boulder problem Deal With The Devil (8B).

Giuliano Cameroni and Nalle Hukkataival have made the first ascent of Deal With The Devil, an impressive 8B highball on the Teufelsstein boulder at Göschenen in Switzerland. Located on the road that leads to the Gotthard Pass, for thousands of years this 12 meter high granite block was shrouded in local legend and, as such, considered by many of national historical importance. So much so that when the new road was planned in 1975, local opposition forced the builders to move the 2000 ton boulder 127 meters further north, and a staggering 3.3 meters uphill.

The boulder is recognised as being not only one of the most visibile in Switzerland but also, as Hukkataival states, one of the most expensive: at the time the operation cost the government 300,000 Swiss Franc. Although routes have been established on the boulder in the past, this is the first time the rounded arête has been climbed.

So the Swiss paid 300 000 francs for this boulder weighing 2000 tons and moved it UPHILL to a better spot to save it. And now we’re climbing on a rad project on the most expensive boulder in the world. Thanks Switzerland! #bouldering @blackdiamond @lasportivagram