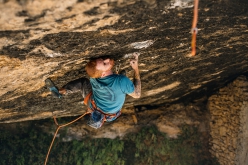 After an intense courtship that began towards the end of 2014, on 30 December 2019 Gabriele Moroni finally sent one of his biggest nemesis, Demencia Senil (9a+) at Margalef established in 2009 by Chris Sharma. Here’s the uncut video of the 32-year-old Italian as he seemingly strolls up his third route of this grade, after Classified (9a/+) in Frankenjura, Germany, in 2013 and Goldrake at Cornalba, Italy, in 2014.

Catalunya, especially Siurana and Margalef, have always been my “winter holidays” choice for more than a decade... During the first five or so years, I repeated a good number of hard routes till 9a but never really tried anything at my limit. I remember staring at Demencia Senil from below countless times knowing it might suit my style but something stopped me from trying it until December 2014... That day, I wouldn’t have ever thought I had just started such a biblical process with a lot of trips, amazing days but also some shitty ones, trashed skin, blood and countless meters of tape... But at the end it was all worth it and I have never stopped believing!... DEMENCIA SENIL 9A+ : @marcozanone #e9team #petzlteam #scarpaspa #frictionlabs @e9clothing_official @petzl_official @scarpaspa @frictionlabs @urbanwallmilano