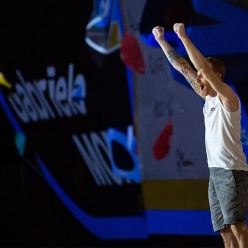 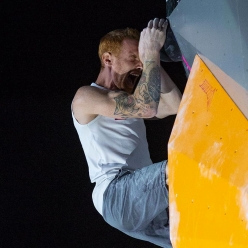 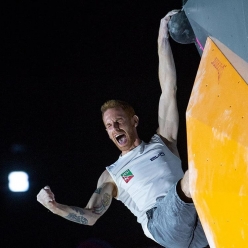 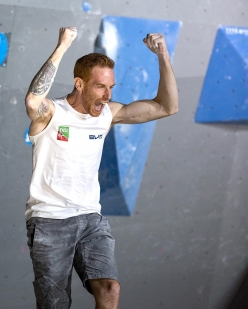 Interview with Italian climber Gabriele Moroni after last week’s victory in Japan at the Hachioji stage of the Bouldering World Cup 2018.

For a second last Sunday time stood still. For a brief moment, up there, matched to the top and having finally nailed his yearned-for victory, he closed his eyes and savoured that magical moment, relishing in a mix of joy and disbelief. Then he jumped back down onto the mattress and returned to reality as the raucous audience got to its feet and applauded not only a deserved victory, but also an athlete who for over 17 years had always competed in Boulder World Cups at the top, but never at the absolute apex. This was undoubtedly his moment, the instant that gave him "one of the most exciting moments of my life." So here it is, that sweet first victory of a Boulder World Cup stage seen through the eyes of Gabriele Moroni.

Gabriele, a few days have passed since the comp and the first question can only be: how do you feel right now?

The last few days have been a total confusion, all that excitement after my win, the celebrations, the trip to the US for the Vail stage of the World Cup this weekend, battling jet-lag. How do I feel? Satisfied I’d say. It’s been a long journey, a series of incredible experiences that concluded unexpectedly last weekend. I've always tried to win but maybe I myself never really believed it was possible. Especially in the last few years ...

Let's talk about the comp in Japan. What springs to mind?
In the first round, the qualifiers, the initial feeling wasn’t great, as always on the first day of a competition when I travel to the east. My muscles aren’t reactive but somehow I drag myself through the round and qualify. The next day I feel much better and produce a perfect semifinal, sending three problems without wasting precious energy. I know I’ve climbed well, look at the board and notice I’m in the lead. And then I stay there until the end of the Semis.

A few hours later you’re in the final, with the best 6 battling it out on 4 problems. What's it like stepping out and seeing the first bloc? The one that only you sent, on your second attempt…
Actually, during the reconnaissance I was worried about the start and placing my foot, but during my attempts this proved easy. The final part was all about body position, adapting between the holds and footholds, a style that really suits me thanks to my experience outdoors on rock.

Only Chon topped the second, only Sugimoto topped the third.
Yes but I have to say that I got really close to sending both those problems. I knew Chon had sent #2 and that Sugimoto had topped #3. With this year's new rules though, athletes can see the results after each problem in the finals. So I knew I had one zone more than the others.

Then came the last problem, the make-or-break moment.
I knew Tomoa had flashed the last problem. But I also knew that all I needed to win was a zone, so my tactic was to give everything I had on the first try. And had I failed on that attempt, then I’d have spent the remainder of the 4 minutes trying to reach the zone.

You were competing in Japan, in the "lion’s den" that is currently producing many of the world’s best athletes and that in 2020 will host sport climbing’s first Olympic games
In truth, of all the World Cup stages this was the most important one for me because it’s the home of the very best in recent years. And sharing a podium with two of them was one of the most exciting moments of my life. Having said that, this year the European team is defending itself really well. We’re a close-knit group of friends and this is our strength this year!

One often talks about dreams that come true. So how important is this gold medal?
It's a dream I've always had. But in the last few years the prospect of winning became more and more remote… The importance of this victory is relative, it’s certainly a crowning achievement in my competition career, but it definitely won’t change my life. I hope, however, that it’s inspired people, in particular youngsters out there, to believe in themselves and never stop dreaming.

In your career you’ve also won 4 silver medals, on countless occasions you’ve just missed making the finals. So maybe this gold is the end of a nightmare?
No, absolutely no nightmare whatsoever. I’ve always been happy and content with my results and my climbing career. I'm very proud of my second places. I know I’ve often been unlucky in competitions, but this too is part of the game.

For the benefit of those who don’t compete: can you please explain what it means to qualify for a final? How difficult is it to make the cut?
I believe that if you don’t compete against the very best, and sometimes even when you do, you never fully comprehend what it means to qualify for an international final. Or a semifinal for that matter. Actaully, the hardest round in a World Cup is the qualification because the route setters, with problems that usually are not all too difficult but easy to mess up, have to whittle the field down from over a hundred athletes to just twenty, ten for each group.

And of course the level is very high.
Yes. And in every comp, some of the best fail to qualify. Potentially, about 40 athletes can aspire to qualify for a final. Then when you’re in the final, everyone stands a chance of winning, especially this year where nobody is light-years ahead of the others. I personally don’t feel I’m any worse that the others when I climb at my best. I just has to be my day.

There’s a lot of talk about old school and new school route setting, of “parkour" style boulders and competitions that no longer resemble bouldering on rock. Any thoughts?
Route setting has certainly changed a lot in the last ten years and the route setters have rightly tried to be influenced by disciplines that are similar to ours, with regards to mentality and age. Parkour or skateboarding for example. This means big moves across volumes, dynoes, careful balance and various tricks... Personally I'm not a big fan, especially when it comes to leg coordination but I think it's an essential part of the modern climber’s motor skills. Then again, in the last two or three years the style has begun to return to normal and the physical aspect remains key. We’ll never return to the style used in the past, fortunately, because this wouldn’t test all the skills of today's athletes.

Gabriele we remember you from the European Bouldering Championships in Lecco in 2004 when, as a mere 16-year-old, you made an unprecedented debut into the senior World Cup. That ws a long time ago. What remains from that youngster and his unstoppable love for climbing?
I talked with Jorg Verhoeven and Katharina Saurwein earlier today about the past and about how much every competition, regardless of whether it goes good or bad, leaves you with a flood of memories. We’re some of the oldest athletes on the competition circuit, adults, but still here testing ourselves, driven by the love for climbing and the desire to do beautiful things, just like when we were teenagers years ago. So why quit now?

03.06.2018
Gabriele Moroni miraculous in Japan!
Gabriele Moroni has clinched a historic victory by winning his first-ever gold medal at the Hachioji stage of Bouldering World Cup in Japan. The 31-year-old Italian shared the podium with local climber Akiyo Noguchi.