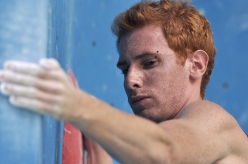 PORTFOLIO / gallery Portfolio: Gabriele Moroni is Off The Wagon in Valle Bavona

Gabriele Moroni is Off The Wagon in Valle Bavona

Italian rock climber Gabriele Moroni has repeated Off the Wagon, the famous boulder problem graded 8B+ in Val Bavona, Switzerland.

News just out of Switzerland’s Bavona Valley is that 31-year-old Italian Gabriele Moroni has repeated Off The Wagon with its original start, i.e. the famous problem freed in 2012 by Nalle Hukkataival with its start off the farmer’s wagon.

The boulder was in the news a few days ago thanks to America’s Shawn Raboutou who became the first to send the problem crouched on the wagon. This adds an extremely difficult starting move to the problem that, even without the low start, weighs at 8B+.

Moroni had started trying the bloc a few years ago with Luca Rinaldi, but the first move seemed simply impossible. An astute foothold swap right at the start thanks to beta provided by Giuliano Cameroni proved key to success.

The video of Moroni’s ascent is impressive because, as is so often the case, when everything works perfectly the actual moves appear effortless. Behind this success, however, are dozens of attempts spread out across different seasons and, in particular, two 8C’s: Ziqqurat at Gaby in Valle d'Aosta and The Story of Two Worlds at Cresciano in Switzerland in 2014. And also, thanks to Goldrake at Cornalba, sports routes up to 9a+.

Moroni’s ascent begs the question as to the low start. "I managed to do the starting move Shawn did, but the transition to the next move is the difficult bit" Moroni told planetmountain.com. "I honestly don’t reckon I’ll try the low start much, for me Off the wagon is Off the wagon. A symbol."

It’s worth noting that Moroni sent the problem completely on his own - as is almost always the case when he works difficult projects - and that the background noise you can hear at the start is ice falling down in the valley. Evidently conditions were crisp…

04.02.2016
Luca Rinaldi boulders 8B+ with Off the Wagon in Valle Bavona
Italian climber Luca Rinaldi has repeated Off the Wagon, the boulder problem graded 8B+ located in Val Bavona, Switzerland.