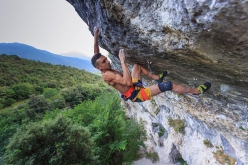 Eric Albertini climbing Pure Dreaming at Massone, Arco, the 9a freed by Adam Ondra in February 2018
Photo by Luca Felter 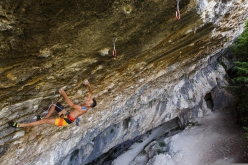 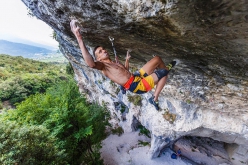 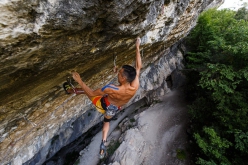 Rock climbing at Arco, Italy: at the crag Massone the 32-year-old electrician from Brescia Eric Albertini repeated the 9a Pure Dreaming and made the first ascent of Infinity. Graded 9a, this 50m outing is now the longest sport climb in the sector Pueblo at Massone.

After some "sabbatical" months during which I too some time off from climbing due to lack of motivation and other problems, I returned to the Pueblo di Masone, my "home" crag to regain some form and find my motivation. After a few tries I made the first repeat of Armageddon, the climb bolted and freed by Alfredo Webber recently, for which I suggest 8c/c+, and then I pulled off the third repeat of Pure Dreaming, the 9a freed by Adam Ondra before his film premiere Silence in February and repeated by Stefano Ghisolfi and Jakub Konecny.

Last Tuesday I managed to free a new connection between Underground and Armageddon for which I suggest 9a. It is the longest climb at Pueblo, a full 50 meters, hence the name Infinity. This winter I plan on trying a project which, for me, is still unbelievably difficult. Fingers crossed.

Thanks S.C.A.R.P.A. and Rafiki for the support.