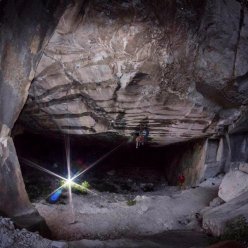 Silvio Reffo making the third ascent of Under Vibes 9a/+ at Massone, Arco. The route was freed by Stefano Ghisolfi in March 2015 and repeated by Slovenia's by Domen Škofic.
Photo by Enrico Veronese

Italy’s Silvio Reffo has made the third ascent of Under Vibes, the 9a/+ sports climb at Massone, Arco (Garda Trentino, Italy).

Keeping up with Silvio Reffo is no mean feat. At the end of November the climber and physiotherapist from Vicenza repeated one of Italy’s most classic testpieces, Noia at Andonno, and he’s now made the third ascent of Under Vibes at Massone. The route is the hardest at this Arco crag, freed by Stefano Ghisolfi in March 2015 with difficulties estimated at 9a/+ and repeated in the meantime by Slovenia’s Domen Skofic.

Reffo, who now hopes he’ll settle the score on some of his Slovenian projects, told planetmountain.com "yeah, when you’re on form and conditions are good you can’t waste a second! Last year I repeated Underground and this year I returned every now and then to attempt Under Vibes. I only managed one go at a time though, due to its intensity and number of moves I never managed to recover quickly enough to give it a second go. The route is at least 40m long, has over 100 moves and you need to clip 35 quickdraws. It never lets up from the start to finish."