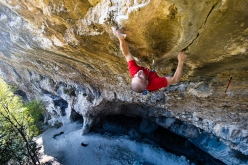 At 48 years of age Alfredo Webber sends his first 9a, Thunder Ribes at Massone, Arco
Photo by Matteo Pavana 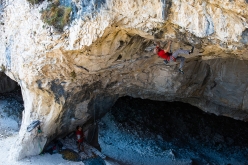 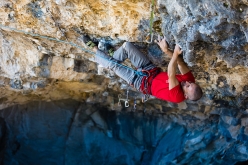 Alfredo Webber on Thunder Ribes 9a at Massone, Arco
Photo by Matteo Pavana 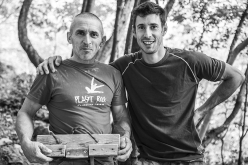 Alfredo Webber with Patrick Bilatti after his ascent of Thunder Ribes 9a at Massone, Arco
Photo by Matteo Pavana

"Matteo you just won't get it. Sending 9a at my age, apart from being a dream, is such an impossible thought. I grew up when 9a was a mystical grade, it seems like yesterday when I first saw the photo of Wolfgang Güllich climbing Action Directe. At the time those moves and those holds were simply superhuman." This is what Alfredo Webber told me when I reached the Pueblo sector at Massone, after giving him a strong hug and congratulating him for his first 9a.

There are some people who, despite their age, remain young inside, for whom age is merely a number. Alfredo is one of these. Constant training, dedication and sacrifices are the basis for his success, for trying to figure out this outstanding performance. Because Alfredo, like all those climbers who aren’t pros, works eight hours a day. In a quarry. The vibrations, the fatigue and constant noise don’t stop him from living out his own vertical dreams. In the mid-1990s, a five-year break was the the reason why he returned to climbing more psyched than ever before; it’s hard to say no to emotions that a sport can provide. But the price he had to pay was huge.

"You have to be consistent, climb on terrain as steep as this to get your body accustomed to this stamina trip. I try not stick to my diet, but only for athletic reasons. In practice, it’s a true inner journey, which for me it is fundamental. I evolve daily as a climber, and it’s a continuous discovery of novelties and friendship. I was definitely influenced by Roberto Bassi. Roberto was completely genuine, he needed only the bare minimum to be happy. His talent and twinkling eyes were a huge source of inspiration for me. Climbing was a game for him, and I want it to be a game for me, too. And just like all other climbers, I’d live to improve a little bit more." The best of luck Alfredo!

12.09.2015
Domen Skofic 8c/+ onsight at Massone in Arco
Slovenia’s Domen Škofic has made an onsight ascent of Reini’s Vibes 8c/+ at Massone, Arco.