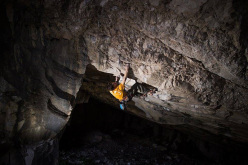 Stefano Ghisolfi making the first ascent of Under Vibes 9a at Massone, Arco
Photo by Martino Beretta

Italian sports climber Stefano Ghisolfi has made the first ascent of Under Vibes 9a at the crag Massone, Arco, Italy

Massone - perhaps the crag at Arco which more than most seemed to have exhausted its potential a long time ago - keeps on giving. While a series of easy new routes have been added to the first sector recently by a tireless team Friends of Arco led by Mauro Girardi, the ultra-steep Pueblo quarry now has a new route freed by Stefano Ghisolfi that is likely to be the hardest at this historic and highly popular venue.

The new route is called Under Vibes, was bolted a few years ago by Marco Ronchi to combine two existing routes, Underground 9a and Reinis vibes 8c. After Underground’s boulder problem start, instead of continuing left around the pillar the line continues right to join up with Reinis vibes to create what Ghisolfi has described as "one of the longest route I ever sent." A true 40m+ journey that comes after Ghisolfi’s repeat of Underground last summer and his first ascent of the 9a TCT at Gravere, dedicated to Tito Claudio Traversa.