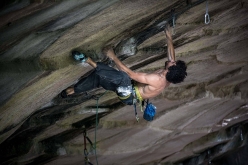 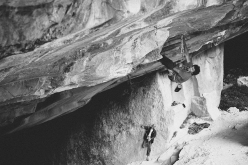 The report by Italian climber Jacopo Larcher who repeated Underground, the 9a sports climb freed in 1998 by Manfred Stuffer at Massone close to Arco (Lake Garda – Trentino), Italy.

Before leaving Italy and moving to Austria, Massone was my home crag. It’s here that I climbed my first 7a, my first 8a, my first 8c. Even if these are just numbers, they symbolize a progression, or rather a maturation, and they also indicate that I really did spend a lot of time there.

During the winter season we climbed at the lower sector, while during the hotter months we found respite in the cooler Pueblo cave, often heading out to Massone from Bozen after school. I reckon I’ve climbed there in all conditions, and got there by all means of transport: car, bike, bus, hitchhiking ... In short, this crag brings back loads of memories.

Before moving to Austria after high school, I’d managed to repeats all the routes except for one, Underground. I’d never tried it, because at the time it frightened me. Perhaps because I remembered that when I was a youngster, I saw the "strong ones" trying it and consequently I never imagined that I myself might be capable of giving it a go.

Deep down though I knew that, sooner or later, I’d have to lay my hands on it, but I’d always put that moment off.

After many years climbing in other areas, two weeks ago Barbara Zangerl and I finally returned to Massone; seeing how disastrous the weather had been, we needed a dry crag where we could climb in the rain and Pueblo seemed the obvious choice.

So that’s how I finally decided to do a few laps on Underground, and early on I realised that it wasn’t so impossible after all. A week later the weather showed no signs of improving so we travelled to Arco once again in search of shelter from the rain and also an opportunity to send my project.

Surely nowadays a route of this sort is nothing particularly special, but for me personally it symbolises something important. It marks the end of a chapter in my life as a climber, it’s a way of saying goodbye to this crag where I spent so much time as a youngster... but above all, it’s made me realise that I’ve "matured" ;-)