Emma Twyford climbing Big Bang at Lower Pen Trwyn in North Wales. First ascended by Neil Carson in 1996, this was the first 9a to be established in Great Britain. Twyford is now the first British woman to climb 9a
Photo by John Bunney 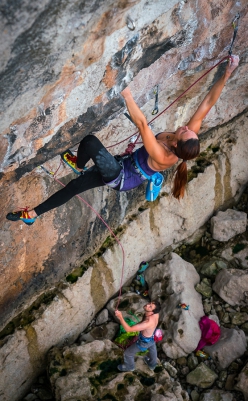 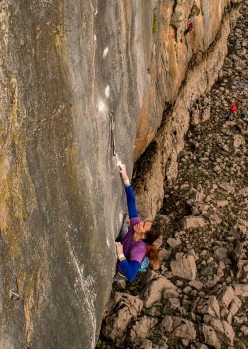 On 17 September 2019 British rock climber Emma Twyford successfully redpointed Big Bang at Lower Pen Trwyn in North Wales. In doing so she has become the first British woman to climb 9a.

History has a strange habit of repeating itself, albeit in slightly different forms. Back in 1996 the utterly underrated Neil Carson raised the bar in Great Britain with his groundbreaking first ascent of Big Bang in one of the crucibles of British sports climbing, Lower Pen Trwyn in North Wales. It was the UK’s first 9a at the time and, after having lain dormant for 15 years, was finally repeated in 2011 by James McHaffie. Now the route has received its third ascent, at the hands of Emma Twyford who, in doing so, has now become the first British female to climb 9a. On Britain’s first 9a as it happens. Here’s how.

Emma, congratulations… wow, where did that come from?!!
I'm not entirely sure, a lot of hard work and stubbornness I guess.

For those who don’t know anything about Lower Pen Trwyn, what makes it so special?
LPT was at the forefront of British climbing back in the day with hard and historical climbs being put up by Ben Moon and Jerry Moffatt such as Statement of Youth (Britain's first 8a) and Liquid Ambar (8c). Also Big Bang put up by Neil Carson in 1996 was the UK's first 9a at the time. This place just has so much history surrounding it with some iconic routes established in the golden era of sport climbing.

In addition to the complexity of the climbs, there’s also the fact that it’s a sea cliff
Yes, the hard part about this crag is that it is right by the sea so it is tidal, you only get a 6 hour window to try your route, and the tides are good maybe every other week so you can't climb there all the time. With the crag being so close to the sea it also suffers from being greasy a lot of the time, so it can really be pot luck. Or getting all the stars to align in your favour.

So why did you choose Big Bang? Surely other 9a’s would have been easier to work as projects
I think because of the history behind it. I climb a lot at LPT because it is close to home for me, only a 40 minute drive. My friend James McHaffie got the second ascent of this route in 2011, we have similar styles so I thought it would suit me! I wanted a challenging project close to home and I liked the climbing on this route, it motivated me so I thought I would stick with it.

Had you tried any other 9a’s? And what was your hardest sport climb prior to this?
No, this was the first one I tried, I thought about one abroad but I don't get a huge amount of free time with so much route setting and I preferred the idea of staying in the UK! My hardest sport climb before this was Mind Control (8c) at Oliana, but that suited my style and went fairly quickly in one trip there.

That’s an enormous leap from 8c to 9a! So much is Big Bang your style of climbing? How long did you try it and how did efforts go?
The lower half of the route is pretty burly (my anti style) but the top half really suited me with crimps and very technical moves. I first had a little look in 2017 but walked away, barely able to link the top crux moves. I knew I had some serious homework to do! I came back in 2018 and started trying it more seriously as I was able to link the crux to the top. I also had other projects and setting work on the go but I came very close ( 5 moves from the top) at the end of last year. At the beginning of this year I picked up a shoulder injury setting for a competition so it was a slow start, but I came close again in the summer, then it just got too hot. This week it finally started to cool down and I finally clipped the chains, which was a weird but happy feeling.

How close was this to your limit?
It's strange because on the day when repointing the route it felt so easy. I’m not really sure where my limit lies. Maybe it is there but I'd like to keep challenging myself and testing that limit if I can.

You’re now first British woman to climb 9a. Any thoughts?
I think that part is a bonus, I'm more psyched though about getting the 3rd ever ascent of this route. That feels pretty special, knowing it is hard and hasn't been repeated very often, and that I'm one of three people to unlock the sequences.

Seems like only yesterday that Rachel Farmer climbed Britain’s first female 8a, Raindogs at Malham Cove in 1993...
One of the most motivating and inspirational books I have is about her, called Face Dancing. I often quote from it in my lectures. Although I never met Rachel she inspired me, I hope that I for my part can inspire other people of any gender to challenge themselves and to push past their comfort zone. Self belief and perseverance really can pay off if you put the hard work in.

Where did you get your motivation from?
For me the motivation for climbing the route was personal, I loved the climbing on the route and the way it kept me psyched even through the challenging times. It was my obsession but I feel like the route is part of me, it gave me lots of valuable lessons even if I was frustrated. The key for me was always to take a positive away from each session, no matter how small!

You’ve climbed E9 on various occasions. Now 9a. Whatever next?
I don't really know where my climbing will take me. I'd love to return to the Dolomites (she recently repeated Camillotto Pellesier on Cima Grande di lavaredo, ed) and do some more Alpine climbing. For now I'm just enjoying the moment!