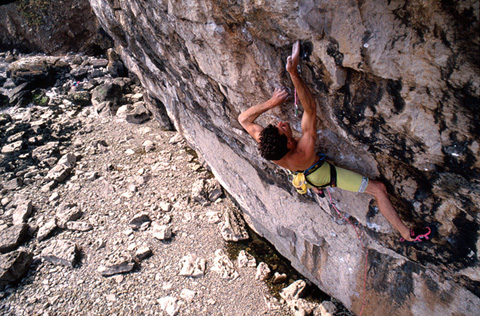 One of the finest sport climbing crags in North Wales, Lower Pen Trywn on the Great Orme just north of the seaside resort Llandudno hosts circa 60 routes up to 9a. The main brunt of climbing was developed during the mid '80s and includes a string of three star classics such as Ben Moon's 1984 masterpiece Statement of Youth. Although not the hardest route at the time, in many ways this 8a heralded the real start of the sport climbing revolution in Great Britain.

The crag is famous above all for another two iconic routes. The first is Liquid Ambar, Jerry Moffatt's 1990 masterpiece originally graded 8c but now widely considered to be 8c+, and The Big Bang, Britain's first ever 9a established by Neil Carson in 1996 and still unrepeated...

Other superb sport climbs include I've been a bad, bad boy 7c+ (Mark Pretty, 1988), Over the Moon 8a (Andy Pollitt, 1988) and Melancholie 8b (Adam Wainwright, 1992) as well as some easier lines such as Face race 7a+ on the left and Under the Boardwalk 6c on the right-hand side of the crag, next to the classic trad climbs Twisting by the Pool and Jacuzzi Jive.

As the name suggests Lower Pen Trywn, or simply LPT, is the lower tier of Pen Trwyn and is located at sea level. Climbing is possible at low tide only, adding a touch of spice to the ambient since although the sea may look a long way away, when the tides turn, the water comes back extremely quickly indeed. Make sure you're not locked on a project!

From Llandudno drive north towards Great Orme/Marine Drive. After the bouldering area Parisella's Cave climb over the wall and scramble down the steep slope to reach the shore and crag.

Accommodation of all sorts in Llandudno, alternatively, Llanberis is only half an hour away.

LPT is the lower tier of Pen Trwyn, and Upper Pen Trwyn immediately above the private Marine Drive offers a class selection of sport climbs and trad routes.

For detailed information about climbing at Lower Pen Trwyn check out northwaleslimestone.wetpaint.com

No comments for Lower Pen Trwyn 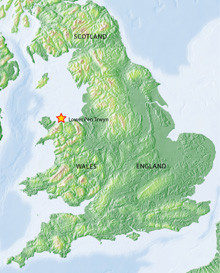 Spring, summer, autumn. The crag recieves the morning sun. Lower Pen Trwyn is affected by the tide and as such can only be climbed on for about 6 hours around low tide. Check the tide timetable prior to your trip.