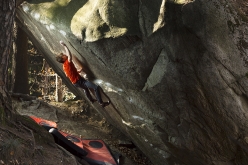 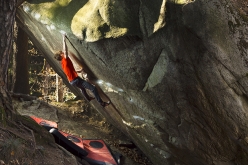 PORTFOLIO / gallery Portfolio: Dreamtime at Cresciano, the boulder problem by Fred Nicole between dream and reality

Dreamtime at Cresciano, the boulder problem by Fred Nicole between dream and reality

The Classics | Boulder continues with the third episode dedicated to Dreamtime at Cresciano in Switzerland. Germany's Jan Hojer and Juliane Wurm take a step back in time and explore this problem established in 2000 by Fred Nicole and hailed as the world's first 8C.

There is no such thing as the most famous boulder problem in the world. But the one that more than any other captured the imagination of climbers at the beginning of the new millennium was most certainly Dreamtime, that diagonal line of tiny crimps at Cresciano in Switzerland first climbed in November 2000 by Fred Nicole.

At the time it was hailed as the first 8C boulder problem in the world, and although over the years many have discussed its final grade (maybe it’s 8B+, maybe a hold was modified, then a hold definitely broke), what has remained constant is the pure beauty of the line. All the greatest climbers to the world have caressed its holds, starting with Bernd Zangerl and Dave Graham, Chris Sharma, Christian Core, Malcolm Smith, Mauro Calibani, Tyler Landman, Daniel Woods, Nalle Hukkataival, Dai Koyamada, Kilian Fischhuber, Paul Robinson, Jan Hojer, Gabriele Moroni, Adam Ondra, Giuliano Cameroni and a handful of others.

"The name Dreamtime stands not only for the difficulty of the line, but also its beauty" explains Nicole. "We had been in Australia over the summer, so I felt that this name was a good fit. For the Aborigines, 'dreamtime' means a kind of half-dreaming trance, somewhere between dream and reality, or a dream that becomes reality. When I saw the line for the first time, I thought: Wow! Is that even possible? And then it finally happened. Dreamtime was a very special time for me, a highlight in my climbing life," recalls Nicole.

In this video the Swissman relives those moments alongside two German sports climbing aces: the winner of the 2014 Bouldering World Cup Jan Hoyer and 2014 World Champion 2014 and 2015 European Champion Juliane Wurm.

16.11.2009
Dreamtime, a dream which vanished for a second only
Michele Caminati talks about the broken hold on Dreamtime, the legendary boulder problem established by Fred Nicole in 2000 at Cresciano, Switzerland.

12.02.2008
Gabriele Moroni climbs Dreamtime at Cresciano
On 02/02/2008 Gabriele Moroni from Italy repeated Dreamtime (Cresciano, Switzerland), one of the most beautiful and famous boulder problems in the world.