► News ► Climbing ► Dreamtime, a dream which vanished for a second only 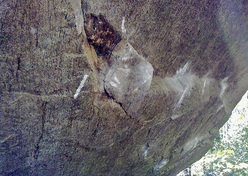 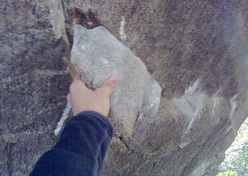 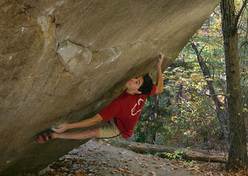 PORTFOLIO / gallery Portfolio: Dreamtime, a dream which vanished for a second only

Dreamtime, a dream which vanished for a second only

Michele Caminati talks about the broken hold on Dreamtime, the legendary boulder problem established by Fred Nicole in 2000 at Cresciano, Switzerland.

When in 2000 Fred Nicole from Switzerland made the first ascent of Dreamtime at the boudlering hotspot Cresciano, it was clear that it was something important. Not only because of its difficulties, estimated to be around Fb8C by one of the strongest boulderers of all times, but also because of its beauty, its line in the middle of the forest, for its hard, pure moves. So beautiful and important the Dreamtime immediatly did as its name suggests, it made everyone dream and, in doing so, it became a reference point for cutting-edge problems, one of the most famous boulders in the world, second perhaps only to Midnight Lightning, freed by Ron Kauk in 1978 at Camp Four in Yosemite.

During these nine years all the strongest climbers in the world had caressed these holds, have lived the dream. Some said it may perhaps be 8B+ instead of 8C, others were convinced that some holds had subsequently been modified. But this did nothing to belittle the problem, on the contrary. Now though the news is that one of the dream's holds is no longer there: the all-important crux pinch which led to the dyno has broken off. No one knows when or how it happened, all we know is that a couple of days ago the Italian boulderer Michele Caminati discovered it all together with the extremely strong Japanese climber Akito Matsushima. Caminati recounts the "discovery" and invites all, even without that hold, to continue dreaming.

Dreamtime, now more than ever before by Michele Caminati
On Tuesday I wanted to make use of the great weather to set the record straight with the problem which for three years has tested me more than any other and which finally I felt close to sending... Dreamtime. I reached the car park and happened to meet Akito Matsushima who, alone and loaded like a porter, set off towards the problem. Great, at least today I won't be on my own. So I shouldered all my gear and began the walk. When I reached the problem I say Akito staring incredulous at the boulder: WHAT!!!??? He picked up a piece of rock circa 20cm long, the left-hand side was the crux pinch for the dyno, it still had chalk on it and the tick marks where to hold it best. We were blown away: Akito had tried the problem just a couple of days ago! And I saw the dream of climbing one of the most beautiful problems I'd ever seen vanish into thin air, like when the alarm clock wakes you at 7:30am...

Wait, perhaps not all is lost: the hold broke in such a way that it left a vertical crimp, slightly lower down and, all things considered, not even too ugly. But now a foothold was missing to do the final moves! Could it still be climbed? We immediately got to work: spring-loaded Akito managed to repeat the dyno after a couple of attempts, pushing off your foot so close to your left-hand now requires great coordination... I felt clumsy and awkward in that position, I only just managed to touch below the lip. OK, it's hard for me, but it's feasible. I'm curious so I check out the last section: it's strange looking for new methods to a sequence I'd repeated hundreds of times... After a couple of attempts I manage to find a heel-hook, high above the lip, which offers just enough precarious balance to grasp the last hold and mantle onto the top.

At the end of the day the problem is still possible, even if I'll have to find a better way for the dyno which is now much harder and hit and miss. Getting there from the start... is always a real journey! "OK, now it really is 8c!" Akito and I say laughing and, by now tired, we head off to other problems.

All things considered the dream hasn't vanished, I had got really close but now she's got a good advantage: it'll mean that I'll still be able to spend many a day attempting and admiring its beautiful lines, no longer the same as before but, now more than ever before, it's DREAMTIME.