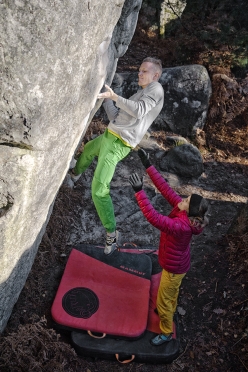 Jakob Schubert, spotted by Anna Stöhr, reaching for the famous undercut on C'était demain 8A at Fontainebleau, France
Photo by Rainer Eder 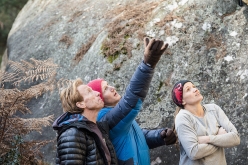 Jacky Godoffe, Jakob Schubert and Anna Stöhr below C'était demain 8A at Fontainebleau in France
Photo by Rainer Eder

C'était demain, the first 8A boulder problem in Fontainebleau

The series The Classics | Boulder introduces C'était demain, the famous first 8A boulder problem at Fontainebleau in France. Jakob Schubert and Anna Stöhr attempt to repeat the bloc first climbed in the cradle of bouldering by French climbing champion Jacky Godoffe back in 1984.

250 different areas, circa 30,000 problems and the first recorded climbing activities dating back to the 1880s… Fontainebleau just outside Paris is without a doubt the cradle of bouldering. Some important milestones: in 1934 the famous French alpinist and "Bleausard" Pierre Allain established Angle Allain at Cuvier Rempart, the first Fb 5+ in the forest while in 1946, thanks to Allain’s first modern climbing shoes his friend René Ferlet climbed the forest’s first Fb6A La Marie-Rose. In the ensuing years standards rose considerably, thanks above all to Paul Jouy, Robert Paragot and climbers such as Marc Le Ménestrel, Alain Ghersen, Olivier Carriere and Jean-Baptiste Tribout. And of course tireless Jacky Godoffe who, in 1984, made the first ascent of a problem that was destined to become a legend: C'était demain.

"At the time, I was influenced by Reinhold Messner's book "The Seventh Grade" and I absolutely wanted to introduce a new eighth grade in Fontainebleau, an area famous for its strict ratings," recalls Godoffe who was the first to weight that tiny foothold and stick the tenuous undercling. A move that resulted in the first 8A in the forest, later confirmed by Marc Le Ménestrel and Alain Ghersen. The name of the problem at Cuvier Rempart was inspired by another book Godoffe had just read, namely the science-fiction classic "Looking backward" by Edward Bellamy, in French: "C'était demain". "I found the name very symbolic for a transition from past to future" recalls Godoffe.

More than three decades have passes since that moment, yet even today the problem remains a formidable challenge and one of the least repeated 8A’s in the Forêt de Fontainebleau. Accompanied recently by Godoffe, Austria’s Jakob Schubert and Anna Stöhr soon found out why. It goes without saying that these two superb competition climbers obviously fare extremely well on the rock, too: Schubert has sent 8C boulder, while Stöhr recently sent 8B+.