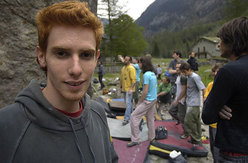 On 02/02/2008 Gabriele Moroni from Italy repeated Dreamtime (Cresciano, Switzerland), one of the most beautiful and famous boulder problems in the world.

As those in the know are well aware, the problem was originally graded F8c but now seems to be settling down at F8b+. But they all seem to agree that no grade can be attached to this dream moment.

Moroni has now set off for a bouldering trip in the States and we'll be hearing more from him later. In the meantime enjoy the video, filmed on a mobile phone from by our field reporter Nicola Noè ;-)