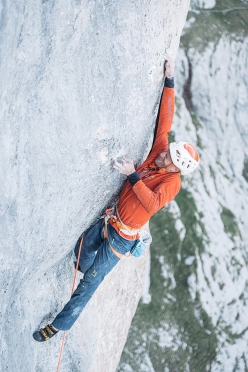 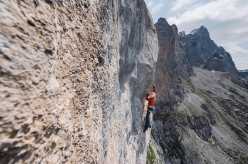 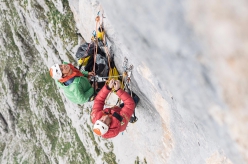 In 2011 Cédric Lachat and Nina Caprez managed to repeat Silbergeier, Beat Kammerlander’s masterpiece on the IV Kirchlispitze in the Rätikon in Switzerland. The two have now returned to their backyard mountains with their eyes set on another Kammerlander test, Wogü established in 1997 on the nearby VII Kirchlispitze.

The seven-pitch outing kicks off with the hardest section right at the start - an 8c intro with a bouldery section estimated at Font 7C - followed by a further six pitches which offer little respite: 8a, 8b+, 8b+, 8b+, 8a+, 7c+. The line was freed by Adam Ondra in 2008, a mere 15 years at the time while climbing with Pietro dal Prà, and the name is a tribute to one of the climbers who has influenced sport climbing the most: Wolfgang Güllich.

After those ascents Wogü remained unrepeated until 2016 when Spain’s Edu Marin made the second ascent, while the third in 2017 was carried out by Germany’s Roland Hemetzberger. Now, after "working" the line during a couple of weeks of bad weather, Lachat has made the fourth ascent. He did so without making any falls on the redpoint ascent, while Caprez's attempts seem promising.

The repeat is part of Lachat’s project called "Swissway to Heaven" during which he aims to repeat some of the hardest multi-pitch sport climbs in the Swiss Alps, such as Zahir at Wendenstöcke in the Bernese Oberland, Fly in Lauterbrunnental and Yeah Man at Gastlosen.