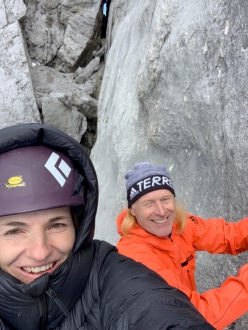 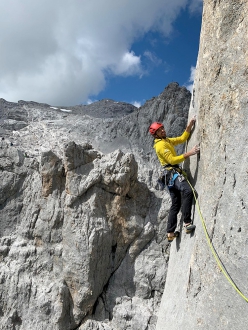 Barbara Zangerl belayed by Beat Kammerlander while repeating his Kampfzone in the Rätikon
Photo by Barbara Zangerl, Jacopo Larcher archive

On 06/08/2020 Barbara Zangerl made the first repeat of Kampfzone, an 8b+ multi-pitch in the Rätikon first ascended by Beat Kammerlander ground-up in 2013 and freed in 2017. Jacopo Larcher followed suit yesterday.

Last Thursday Barbara Zangerl made the first repeat of Kampfzone, the five-pitch alpine sports climb on the Kleiner Turm in the Rätikon massif first ascended ground-up in 2013 by Austrian climbing legend Beat Kammerlander and freed in 2017. Her life and climbing partner Jacopo Larcher followed suit yesterday.

Zangerl and Larcher spent two days trying the route prior to the successful repeats. Belayed by Kammerlander himself, 32-year-old Zangerl climbed all pitches without falling. What is notable is that before her redpoint she had concentrated her efforts on mainly the first two pitches, meaning that she hardly knew the third 8a+ at all, and flashed the fourth and fifth pitch, 7a and 7c respectively, guided by Kammerlander’s beta. Larcher’s repeat of the route was not quite as smooth and the South Tyrolean required two goes to redpoint both the crux and final pitch.

Talking to planetmountain.com after their ascent, the duo stated "Kampfzone is one of the most beautiful routes in the Rätikon... on a par with Silbergeier. We were really surprised by the rock quality and the varied styles of climbing. From powerful moves to technical, scary slab climbing; Kampfzone has it all!"

Zangerl and Larcher are some of the strongest climbers in the world and are well-known for their hard multi-pitch repeats, above all on the big walls of El Capitan in Yosemite, but also across the Alps. Zangerl’s list of hard alpine multi-repeats includes the Kammerlander Rätikon classics New Age, Silbergeier and Unendliche Geschichte. The only one missing off this list is Wogü. And a ground-up first ascent of their own…

16.03.2018
Nina Caprez and Barbara Zangerl climbing Die Unendliche Geschichte in Rätikon
The video of Nina Caprez and Barbara Zangerl and their 2015 repeat of the famous multi-pitch alpine sports climb Die Unendliche Geschichte in Rätikon, Switzerland. First ascended by Beat Kammerlander, the route had only been repeated once previously, by Pietro dal Prà in 2005.