Beat Kammerlander making the first free ascent of Kampfzone (8c, 5 pitches), one of the most difficult multi-pitch sport climbs in the entire Rätikon massif.
Photo by Hannes Mair 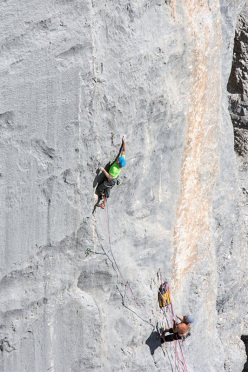 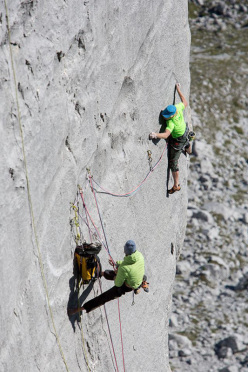 Interview with Austrian climber Beat Kammerlander after the first free ascent of his alpine sports climb Kampfzone (8c) in the Rätikon massif.

In 2015 we first reported about Austria’s Beat Kammerlander and his Kampfzone, a difficult five-pitch alpine sports climb he’d established in 2013 ground-up high up in his home Rätikon massif. Boasting an overall grade of 8c and a staggering 8a obligatory climbing, the project was destined sooner or later to become one the hardest climbs in the entire massif. At the time though the Austrian climbing legend - who has routes like New Age (1988), Unendliche Geschichte (1990) and Silbergeier (1993) to his name - was forced to abandon his attempts due to the brisk onset of winter at 2800 where the route lies. Two years later, banking on his 58 years of technique and tenacity, Beat Kammerlander finally freed this "rare gem".

Beat, let's get straight to the point. What makes Kampfzone so hard?
I’d say the continuous difficulties coupled with the style of the actual moves. The climbing on the crux pitch is extremely technical, you stand on the tiniest of footholds, crimp the smallest edges. The moves are really, really complicated. Power won’t get you anywhere up there.

Is there anything easy about this route?
The first 5 meters! Just kidding. There’s a 7a pitch, the fourth, where things ease off a little. All the rest though requires 100% concentration.

You needed more than 100% concentration when you established it ground-up in 2013. This has been your hallmark style for decades. Why?
Not only mine! It’s the style of all mountaineers, you climb something from the bottom to the top! All I've done is applied this to my alpine sport climbs. I reckon that if I bolted routes from above, then I’d be missing out on half the fun. Simply placing bolts from above, then figuring out the moves and going for the redpoint would be reductive and mentally really boring. At least, for me. Going ground-up is really fun!

And complicated
Absolutely! But ground-up also means having to learn how to renounce, coming to terms with giving something up even if you really want it. In our modern fast-food society this isn’t easy.

So, in the case of Kampfzone: ground-up and hard
Yes. I think it’s worth making distinctions. Finding a hard route, one that is at your limit and then working it from above before freeing it, is easily done. Just find some rock and add some bolts and you’ve got it. But finding a route that also happens to be at your limit, while you’re climbing up into the unknown, with all the complexities and uncertainties  involved in ground-up climbing, this is something completely different. This doesn’t happen very often. And if you add to this the fact that Kampfzone climbs absolutely perfect rock, then you can easily understand why this route is a very rare gem.

Form the photos it looks completely blank
Yes. When I first started climbing it I couldn’t even see the holds. Only with time and patience did I start to unlock the moves.

As we reported previously, in summer 2015 you came close to the redpoint but then winter came along. Last summer you didn’t even try it. What happened?
I had to take some time out due to a knee injury. Then there was rehab. It took a while to get back into shape.

This summer things fell into place
Yes. After the lay-off I was extremely motivated. But I also knew that the target I’d set was high, perhaps far too high. I was aware that perhaps I’d never manage to free it…

Also because, talking of high, the route isn’t at a crag but up in the mountains
That’s correct. It’s located at about 2800 meters, which means that the chances of getting good conditions are reduced even further. What's more, that particular place in the Rätikon acts as the border for weather fronts. There’s always a strong wind up there, conditions are almost always harsh.

In the end though you succeeded
I was on form physically, but I think I succeeded largely due to my metal strength. You know, it’s true, at the end of the day the brain is the most important muscle of all.

Talking of muscles: Beat, you’re 58 now, no longer the youngest, yet there seems no stopping you. All these years of climbing, don’t you feel them physically?
Yes I do, very much so! Now for example I’ve got some shoulder problems because of the route, I’ve got to be careful not to overtrain. At my age I’ve realised that I can’t overdo things and as I get older, finding the right balance between climbing hard and not exaggerating is key.

Last question: how do rate this climb?
Everyone I know who’s seen and tried the line has really raved about it, and I’ve really enthusiastic, too. It’s pretty unique and, regardless of the grade, I had great fun climbing it. That’s what makes it special to me.