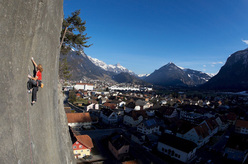 Beat Kammerlander during the first ascent of his "Prinzip Hoffnung" at the Bürser Platte in Vorarlberg, Austria.
Photo by Peter Mathis 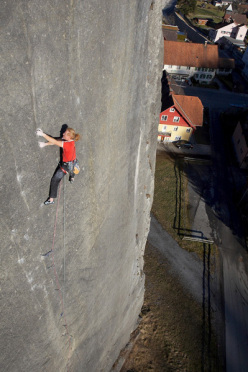 Beat Kammerlander during the first ascent of his "Prinzip Hoffnung" at the Bürser Platte in Vorarlberg, Austria.
Photo by Peter Mathis

Beat Kammerlander has made the first ascent of the trad route "Prinzip Hoffnung" (8b/8b+, E9-E10) at the Bürser Platte in Vorarlberg, Austria.

There's simply no beating Beat Kammerlander! Starting with his early hard repeats in Buoux and the Verdon in the 80's, and moving on to his hard first alpine ascents in the '90's in the Rätikon and extreme first sport climbing ascents at the Voralpsee, Kammerlander has always been a reference point for style and ethics. It comes as no surprise therefore that the 50 year old climbing legend has once again made a name for himself, as he now checks in with a top end trad first ascent at the Bürser Platte in Vorarlberg, Austria.

Just a few days ago the Austrian climbing legend carried out the first ascent of his "Prinzip Hoffnung", a thin 40m crack which splits the smooth slab right above Bürs in half. The crack peters out at circa 25m and the route breaks right at this point, via the desperate crux, to continue via another thin crack 6m higher to the top. Kammerlander had climbed the line on bolts almost a decade ago and after removing them now believes the route weighs in at around 8b/8b+, or perhaps somewhere in the region of E9-E10, seeing that it is protected with trad gear only and has marginal protection on the extremely crimpy crux.

Even if Kammerlander is famous for his daring and runout first ascents, often carried out from the ground-up, he stated that the protectionless crux had created sleepless nights. When he finally managed to link this section, in temperatures down to -4°C, he was "so surprised that I still stuck to the rock, like a drop dangling under a ceiling. I felt that I as falling but I kept going for it. The primal will that I felt in this situation, coming from deep down in my stomach, is what I remember and what carried me through. When I climb such a route I don’t feel like I am 50 years old."

Kammerlander considers his "The principle of hope" as being one of the great highlights of his career, which include, amongst others, his ground-up first ascent of the modern alpine classics "Unendliche Geschichte" (8b+, 420m, 1991) and "Silbergeier" (8b, 240m, 1994) in the Rätikon, as well his first ascent of Speed 8c+ at the Voralpsee and his solo of the 8a+ "Mordillo" at the same crag. "Prinzip Hoffnung" has an equal significance in my personal development", he says. "Major climbing projects demand development inside myself and that was exactly the case here." What a development... congratulations Beat!

Check out the magnificent video below.