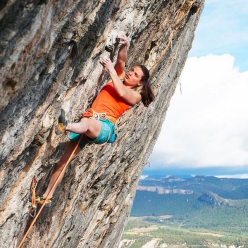 PORTFOLIO / gallery Portfolio: Anak Verhoeven 8b+ onsight, 9a+ redpoint at Oliana in Spain

Anak Verhoeven 8b+ onsight, 9a+ redpoint at Oliana in Spain

At Oliana in Spain Belgian climber Anak Verhoeven has onsighted an 8b+, Gorilas en la Niebla, and redpointed a 9a+, Joe Mama, conferming her status as one of the best climbers in the world.

If you could chose, would you opt for a 9a+ redpoint or an 8b+ onsight? Belgium’s Anak Verhoeven doesn’t need to answer that tough question, in recent days she, amazingly, managed to do both. Verhoeven managed to climb the classic high-end Oliana testpiece Joe Mama in a mere 10 attempts spread out over 11 days, while at the same crag she also made a clean, first go ascent of Gorilas en la Niebla, In doing so she has confirmed her status as one of the foremost climbers in the world, in particular on routes were immense endurance are a determining factor.

Joe Mama is Verhoeven’s second 9a+ after her first ascent of Sweet Neuf at Pierrot Beach in France (repeated and confirmed by Cédric Lachat last June) and is one of the few female ascent of this difficulty, after Margo Hayes and Angela Eiter. As to female 8b+ onsight, this is a rare occurrence, too. The first to hit this mark was Josune Bereziartu in 2005 on Hidrofobia at Montsant in Spain, and others who have followed suit are Maja Vidmar (2010), Sasha DiGiulian (2011) and Kajsa Rosén (2016).

Joe Mama, 9a+! I came to Oliana without having a particular route in mind that I wanted to try. Arriving at the crag, I made a quick decision: Joe Mama. In the time that followed, I went through the whole process of taming a route: Finding the exact beta that suited me. Accepting hot temperatures and wet rock. Treating painful skin and taking extra rest days.  I quickly felt at home in the route, but it wasn’t conquered yet! There are almost no places to shake out or take a breath. The crux is intense on tiny holds, followed by move after move of body tension and endurance. Quite a project... but abandoning didn’t feel like the right option. My first redpoint attempt came and I fell high up, in the crux. Two attempts later I chose a beta change which worked: I passed the crux move shortly after. But then I started falling at the crux move again. And again. And again. I just felt blocked every time I reached that spot and couldn’t move my body up. So, it was time for another change of beta. Just one extra foot movement made the difference and I was ready to keep going! But... the end of the trip was drawing near. Only 2 more climbing days were left. And I felt so close to sending... . . Another attempt. I passed the crux this time, with my new foot beta, but I fell some moves further, on a tricky deadpoint. Nooo... Again, I had to search for one more detail that needed to be changed. And I found it. My 10th redpoint attempt and the last one of that day. I taped a finger with a bloody cut. I felt more tired than before. But I was determined to fight. I passed the crux and the deadpoint move too. Only one more risky move awaited me, right below the chain, but I didn’t want to let go. And I stuck it! What a feeling to clip those chains!!! . . . Most of the trip was spent on Joe Mama, but during a day off my project, I also on-sighted Gorilas en la Niebla - 8b+, a nice and long Oliana classic. Photo by @ezra_byrne @lasportivagram @petzl_official @lecomte.alpirando @xcultclimbing @climbforhim @frigyesvandenauweele #rockclimbing #oliana #lleida #catalunya #equipetapassion #lasportiva #weareclimbers #xcultclimbing