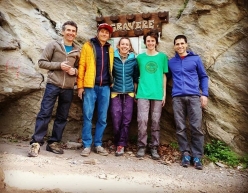 Alexander Megos at Gravere in Val di Susa, Italy, after his second 9a onsight, together with Pietro Bassotto, Claudia Ghisolfi, Davide Bassotto and Marcello Bombardi
Photo by Alexander Megos archive 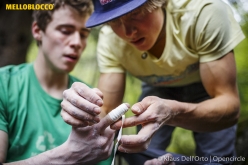 Alexander Megos claims second 9a onsight with TCT at Gravere

Interview with Alexander Megos who on Sunday, May 21, 2017 at Gravere in Italy managed to onsight the 9a sport climb TCT. This is the German’s second 9a onsight after the historic world’s first 9a onsight in 2013.

Last Sunday at Gravere in Val di Susa, NW Italy, Alexander Megos managed to onsight TCT, the climb freed in 2014 by Stefano Ghisolfi and dedicated to his young friend Tito Claudio Traversa. This is Megos’ second 9a in the purest of styles after his amazing ascent of Estado Critico at Siurana in Spain in March 2013, thanks to which at the time the 19-year-old German climber set the climbing world alight the historic first 9a onsight. It’s worth remembering that in addition to Megos, the only other person who has managed to onsight 9a is Adam Ondra (he currently has 3 to his name), and that 9a onsight is currently considered the absolute limit in sports climbing.

Four years have passed since your onsight of Estado Critico. Did your insight of TCT come as a surprise?
Yes, actually a bit more than 4 years have passed since I onsighted Estado Critico. I was really surprised. As I warmed up I felt really bad, I rushed things, didn’t find the right flow and even felt my injured finger a bit. After warming up on a 6c I then climbed an 8a and started wondering whether I should try the 9a, or save it up for another day. It was Claudia Ghisolfi who persuaded me to try the route. And then I thought, why not? It’s always worth giving it a go.

Until recently you’ve always believed you’d never manage to onsight 9a again.
I’d never felt like I was climbing good enough to have 9a onsight within reach. Yeah, I’m obviously I better climber now and far stronger, but nevertheless I never had the impression that I was strong enough.

Well you proved yourself wrong! We’re sure you know that TCT is a somewhat special route in Italy
Yes, I know that TCT is an homage to Tito. Unfortunately I never met him, but I knew him from the news and was really shocked to hear about his death.

Four years ago in Siurana you climbed without any external pressure. You weren’t as famous as you are today and at the time no one expected a performance of this sort
Yes, I had no pressure back then. Nowadays things are a bit different, of course, but I try to put myself under as little pressure as possible. On Sunday for instance I had no pressure at all. I felt so weak that I really didn’t expect anything and so when I climbed I was fairly relaxed.

So how did things go?
The ascent took about 10 minutes I think. The first part went relatively quickly and ran smoothly, then I got to a rest before the last section. This last part is approximately 8 meters long, 45 degrees overhanging, with small and distant crimps. So pretty much exactly my style of climbing. When I reached the lip of the roof I couldn’t believe what I’d just done. But then I needed circa 2 minutes to clip the chain as I didn’t see a hold.

How close were you to your limit?
I was pretty pumped and spent when I got to the top, but I wasn’t at my absolute limit. What amazed me though was that I felt exhausted for the rest of the day. Although I climbed an 8c and an 8c+, I felt completely spent after the onsight.

How often had you tried to onsight 9a prior to this second success?
I must confess I hadn’t attempted many onsights. Acutally, I think that was the first 9a I really tried to onsight. Onisghting a route of these difficulties is not always easy. In the Frankenjura for example, where usually climb, this is very difficult indeed. And if you’re somewhere else then you first have to find a suitable 9a, one which ideally has the quickdraw in it already, then you have to feel good and be strong mentally. Until now these factors had never really combined properly.

Now that you’ve confirmed your 9a onsight: what’s the next step?
Well the next step would be to onsight some more 9a’s. And then obviously onsight a 9a+. Time will tell.

29.11.2015
Alexander Megos 9a+ redpoint and 8c+ onsight at Margalef
At Margalef in Spain Alexander Megos has made a fast redpoint of Demencia Senil 9a+ and onsighted Victimes del Passat 8c+.