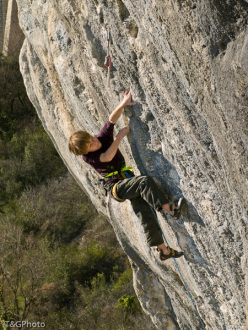 Tito Traversa died yesterday at the age of 12 as a result of a terrible climbing accident at Orpierre in France. He was one of climbing's youngest prodigies. The entire climbing world is shocked and deeply saddened by his death.

Friday, July 5, a black, black day. Tito Traversa failed to make it, the talented young climber from Ivrea, Italy, who was seriously injured last Tuesday in a climbing accident, for reasons which are still officially unclear, from a route in Orpierre in France. His condition was immediately recognised as being extremely serious, so much so that he was hospitalised in Grenoble where, due to the awful head injury, he was placed in a medically induced coma.

The news of the terrible accident and the tragic death of the 12 year-old has shocked and shaken the entire climbing community who rightly identified in Tito a young boy with a boundless joy, passion and talent for climbing. Tito's dedication and determination was extraordinary and his champion-like drive resulted in ascents which were quite simply incredible: his first 8a when he was only 8 in 2010, followed by his first 8b aged 9 and his first 8b+ when he was 10. These numbers placed him among the strongest young climbers in the world and indicated that a great future lay in store, not only for Tito, but also for the entire climbing movement.

On Friday afternoon these numbers and dreams lost all their meaning. His parents Barbara Sirio and Giovanni Traversa agreed to having his organs donated. To them, and to great little Tito, we extend everyone's most sincere condolences.