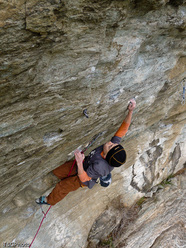 PORTFOLIO / gallery Portfolio: Tito Traversa, 8a at 8 years of age

Tito Traversa, 8a at 8 years of age

8-year-old Tito Traversa has redpointed his first 8a, Faith at Donnas in Valle d'Aosta, Italy

8a at 8. This seems like a tongue-twister, but it's not. It's what young Tito Traversa managed to accomplish on 29 March at Donnas, the nice little crag in Italy's Valle d'Aosta, where he managed to send the slightly overhanging route Faith.

The result is startling, not only because of Traversa's age, but also because of the enormous step forward in terms of difficulty: it was only last June that Traversa redpointed what he defines as his first hard route (Vietato banfare" 7b+ at Frachiamo) and here we are now, not even nine months later, with this extraordinary ascent.

Behind this ascent there's a fast but logical progression, with circa 20 other routes harder than 7b, including one 7b on-sight, seven 7b+ and four 7c. Via his father Gianni, Traversa confided that on Faith he experienced “a fantastic feeling. I set off convinced, climbed smoothly, the moves went well one after the next and suddenly I was at the chain. I remember the other climbers clapping and one man in particular said Chapeau!”

It's clear that a performance like this doesn't come from nowhere, that it's the result of talent nourished by passion. So yes Tito, hat's off!