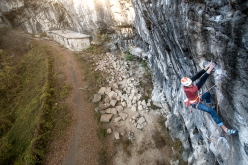 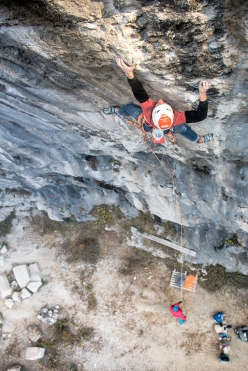 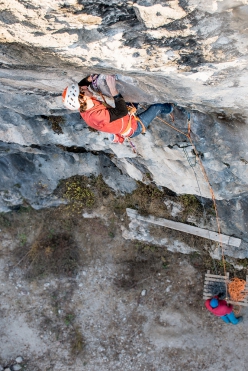 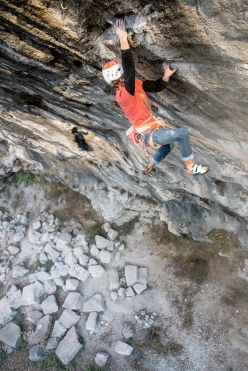 Alessandro Larcher reports about his greenpoint ascent of Bombo Balla at Bus de Vela above Trento, Italy. Put in other words, the Italian rock climber repeated the 8b+ sport climb in October 2020 skipping the bolts and as a trad climb.

Following the closure of all climbing gyms in Italy due to the Coronavirus pandemic, last October I had absolutely no desire to continue training at home during the week and only climb outdoors at the weekend.

But since I live in Trento and since there are many crags in the area, I adjusted my study time and training sessions a bit and managed to transform training at the gym into training at the crag

I decided to climb at Bus de Vela, a crag that’s really close to home with a large quantity of hard routes. The climbing style at Bus is really quite bouldery that’s just what I was looking for.

The first route I tried was Bombo Balla, an 8b+ bolted originally by Valerio Ballardini, which I’d attempted without much success in the past. This time though the moves felt good right from the start and after just a handful of attempts I managed to redpoint the line.

At this point something strange happened: instead of trying another difficult routeI decided, perhaps inspired by James Pearson's repeat of Tribe, that I too wanted to try something hard trad. And Bombo Balla with its pockets and cracks might be the perfect candidate.

In all of this, however, there was a fundamental problem: I’d never actually placed a wire or cam, and had to start from scratch. My father came to the rescue and a few days later we returned to the crag to see i I could skip the bolts and protect the pitch with trad gear. Fortunately we found all the necessary placements and, following my father’s advice, I practised placing the gear and took a few lobs to gain confidence in the gear’s holding power and my ability to place it correctly. The day ended with a pinkpoint ascent of the route (ie with the trad gear pre-placed).

Two days later we returned once again and after the routine warm-up and a final check of some of the cruxes, I decided to make a first attempt. I climbed smoothly, placed the gear properly and kept my nerve to reach the top without falling! I was really pleased to have climbed Bombo Balla trad (better still, greenpoint since the route was originally bolted), not only because it’s a hard route, but above all because this ascent opened my eyes to a whole new dimension.

Despite my trad climbing experience being somewhat limited, I managed to understand some fundamental aspects of trad climbing, such as the importance of the mental aspect. Climbing and placing gear embodies the quest for a balance between climbing and mental fortitude that, compared to sports climbing, is far greater. You have to be fully aware of what you’re doing, and do it properly, when the route is as physical as this one.

This is uniquely beautiful and as I said, it’s opened my eyes to the enormous potential that exists when it comes to repeating sport climbs "on gear"!

I’d like to thank my father for his help, Martin Giovanazzi for the photos and my sponsors La Sportiva, Petzl and Visit Trentino for their support.

07.11.2011
Chasin the Trane greenpoint in the Frankenjura
German climber Heiko Queitsch has climbed the famous Frankenjura routes Fight Gravity (by Kurt Albert) and Chasin the Train (by John Bachar) without using the bolts but with trad gear.

20.09.2011
Arnaud Petit spills the beans about Black Bean, Ceuse
Interview with French climber Arnaud Petit after his greenpoint, ie trad ascent, of the 8b sport climb Black Bean at Ceuse in France.