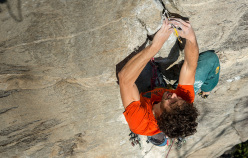 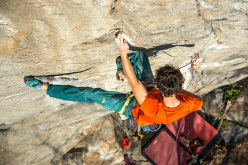 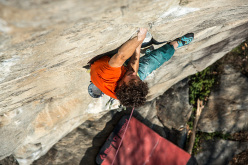 Jacopo Larcher has repeated Lapoterapia, the 8c at Osso (Piemonte, Italy) freed by Alessandro Manini in 2012, this time greenpoint ie skipping the bolts and using trad gear to protect the climb. The report and photos by Riky Felderer.

8c. But not any old 8c sports climb. 8c trad. This is what Jacopo Larcher got up to last week when he returned to Osso to lay his hands once again on Lapoterapia, the sports climb freed by Alessandro Manini in 2012, repeated by Gabriele Moroni and then by Larcher at the end of November. As Riky Felderer mentioned in his report at the time, during those November days Larcher had realized that the thin overhanging crack might go free as a trad climb, i.e. without using the bolts. Knowing that conditions were still excellent Larcher rushed back to Piemonte, this time armed with crash pads and friends. The South Tyrolean was in such a rush that that evening, in the dark, he abseiled down the route by the light of his headtotch to check the pro. The result: a first section, up to the third bolt, which couldn’t be protected and with moves “not particularly simple”. Speaking to planetmountain.com, Larcher explained that “the crack continues and pro isn’t too bad, but the gear at the crux is hard to place and this requires a lot of energy. The gear below is better, so you never really risk hitting the deck, only long whippers.” After the night inspection, last Thursday Larcher began his first attempts, falling off twice just before reaching the “Thank God” hold. on Friday, placing the gear as he went and much to his own surprise, he managed the first trad ascent. The first greenpoint, to use the correct term, which indicates that a bolted sport climb has been done suing nuts and friends. Once again it’s Riky Felderer who shares his photos and thoughts about the ascent of Lapoterapia that checks in as one of the hardest trad climbs in the world.

Not even four days passed since Jacopo Larcher made a “conventional” repeat of Lapoteria that he returned to Ossola, this time armed with a set of friends, to see for himself whether the pitch could be climbed using trad gear. And after a day of falls and tests, on his third go the route was tamed in this style, too.

Larcher climbed the route not without difficulties, also because some friends were placed from uncomfortable positions and the one that protects the crux sequence is the hardest to place. In theory there’s no risk of making a groundfall, but what is certain is that adrenaline pumps faster through your veins when you set off, as does the lactic acid, being that the hold from which you place the red C3 is really poor and the friend is really difficult to place…

After the ascent Jacopo stopped off for another two days to film the climb which checks in alongside those really demanding outings that including, for instance, the extreme slab Prinzip Hoffnung (the famous 8b/+ put up by Beat Kammerlander).

So without much ado and in a brace of shakes we witnessed a repeat of what is destined to become one of the cutting-edge reference routes for extreme trad, alongside routes such as Greenspit in Valle dell'Orco or Rhapsody at Dumbarton Rock in Scotland.

In the meantime Jacopo climbed some stuff elsewhere. I won’t mention it yet for good luck, but more news could come from this front, too.

For completeness and in order to respect the values, it has to underlined that Lapoterapia is a bolted route, that was first climbed by clipping the bolts, and only subsequently climbed “trad”. Things would have been different had it been climbed trad right from the outset, as they would be different were the bolts not there at all.

The route is bolted and will remain as such, seeing that it’s located at a classic sports crag, where climbing it in that style wasn’t remotely imaginable at the time. Although it may seem obvious to most, this is worth highlighting to avoid misunderstandings and the otherwise inevitable controversy bolt/ no bolts.