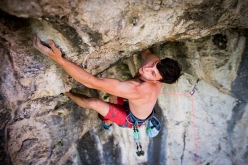 Jernej Kruder climbs 8b+ greenpoint at Kotečnik in Slovenia

At the limestone crag Kotečnik in Slovenia Jernej Kruder has made a trad ascent of the 8b+ sport climb 'Umazana Igra'.

On 4 July 2017 Slovenia's Jernej Kruder pushed his psychological boat out one step further with his trad ascent of Umazana Igra, a 25 meter high 8b+ sports climb first ascended back in 1994 by Vili Guček at the limestone crag Kotečnik. Kruder knew the route intimately and after inspecting the line he realized it was perfectly suited to be climbed in greenpoint style, ie with just a rack of friends and nuts.

Kruder worked the route for three days, during which he took some controlled falls to test the natural gear with the rope clipped into the bolts below for added safety. Just before his successful ascent the 26-year-old noticed a poor nut placement that made the final runout before the last crux less severe. "I felt fairly comfortable with the gear I placed" Kruder told planetmountain.com "but had I fallen from the crux, I would have come close to the ground. Luckily it's not a ground fall though."

Kruder has climbed some hard trad in the past and is therefore no newcomer to psychological testpieces (cue his first repeat of the Deep Water Solo Es Pontas on Mallorca in 2016), but he "really needed strong nerves" for his latest feat which he describes as "one of the most inspiring thing I've ever sent."