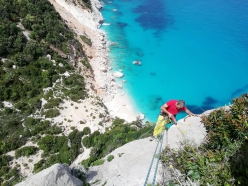 On the famous Aguglia di Goloritzè tower Maurizio Oviglia has rebolted Sole Incantatore, the most repeated multi-pitch rock climb in Sardinia. Oviglia himself established the route in 1995.

25 years after the first ascent of Sole Incantatore, quite possibly the most popular route on Aguglia di Goloritzè and without a doubt the most repeated multipitch sport climb in Sardinia, I decided to rebolt it after a tip-off from some who had recently peated it.

In 1995 I bolted this line on my own, top down, and it was the last route I established in this style. Now though I wasn’t alone, but instead I was accompanied by Enrico Barca, one of the rare but passionate climbers from Baunei. Before rebolting the climb, I received the necessary permission from the Baunei town council and the local police force.

I used stainless steel 316L bolts which, judging by the others on this grey rock, should prove durable. Obviously, periodic maintenance is always key on routes as popular as this one. I also added some bolts along the few run-out sections and replaced several rusty bolt belays.

The most significant change is at the start. Originally this followed the first 15 meters of Sinfonia dei Mulini a Vento, the first route up the tower established by Manolo and Alessandro Gogna, before continuing straight up. At the time of the first ascent I decided to do this in order to not bolt the classic, peg-protected outing; two not particularly great pegs protected this start, while my bolts started after this section. Over the years this has become extremely polished due to the high number of repeats.

I have now added an independent, well-bolted 5c start, located between the Manolo - Gogna climb and Easy Gymnopedie. I also added a belay so that the first, almost 45m, pitch can be split in two. This also means that an abseil with a 70m rope is now possible. The five pitches break down as follows: 5c, 6b, 6b+, 6b+, 6c.

I paid for all the gear and expenses, should anyone wish to contribute they can do so by making a paypal donation using my email account: maurizio.oviglia@tin.it.. If I get more money than what I spent, then I’ll use to the change the French-style belays at the Villaggio Gallico crag. Thanks.

25.02.2013
Aguglia of Goloritzé, restyling of Sardinia's famous tower
Maurizio Oviglia and Gianluca Piras have reequipped the climb Easy Gymopedie and the abseils down the route Sole Incantatore on Aguglia of Goloritzé (Sardinia). The report and video by Maurizio Oviglia about their restyling of one of the most beautiful towers in Italy and further afield. This monolith was climbed for the first time in 1981 by Maurizio 'Manolo' Zanolla and Alessandro Gogna via Sinfonia dei mulini a vento and this route remained untouched.

17.11.2017
Climbing video: Sardinia's spectacular Aguglia di Goloritzé
Two climbers, unknown and beautiful, reach the top of Aguglia di Goloritzè, the splendid limestone needle in Sardinia. A moment of pure joy high above the turquoise sea of the Gulf of Orosei.

30.10.2012
Hotel Supramonte, do masterpieces age? The story of extraordinary maintenance of an extraordinary climb
Maurizio Oviglia reports about the recent rebolting of the famous rock climb Hotel Supramonte. Established in 1998/99 by Rolando Larcher and Roberto Vigiani, Sardina’s famous multi-pitch has now been restored to its former glory by Larcher and Oviglia, with the new stainless steel bolts placed (obviously) in exactly the same place as the original ones.

14.05.2015
Reequipping with 'marine' gear in Sardinia by Louis Piguet
Maurizio Oviglia shares the information, provided by Louis Piguet, about the Swissman’s recent rebolting of some sport climbs in Sardinia located at the Buggerru sea cliff and at Cala Fuii (Cala Gonone).