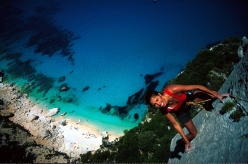 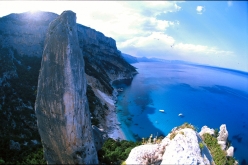 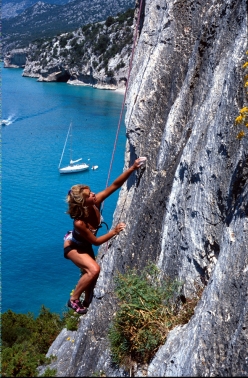 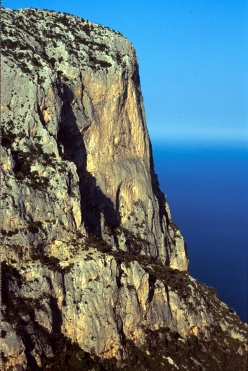 Sardinia, long famous for its magical sun, sand and crystal clear waters, is fast establishing itself as a climbing paradise. One of its national parks, the Gennargentu, tempts further with its numerous multi-pitch routes on fantastic limestone rock high above the sea: the mix proves irresistible.

Biddiriscottai
This sea cliff is characterised by sharp, reddish limestone, fragile in places. Routes are well-bolted, the climbing technical and, since they are abseiled into, the only way is up…
Take two 50m ropes or one 75m ropes.

Regno dei Cieli
One of Sardinia's best, this impressive and atmospheric cliff commands respect. The routes are sharp, technical and sustained, either vertical or slightly overhanging, and very exposed. They are reached via abseil and start way above the ledge at half-height. An abseil retreat is impossible so, if in doubt, leave a fixed rope. Many routes were re-equipped in April 2000 by Lorenzo Nadali, who would like to thank Kong for donating the bolts.

Punta Giradili
Punta Giradili, described by many as one of Sardinia's finest sea cliffs, is breathtaking. It offers fantastic climbing and stunning views onto the Mediterranean sea over 400m below.

Best time of year
The best time of year for climbing in Sardinia is autumn or spring. September is particularly good since the sea is beautifully warm and the island relatively free of tourists. Summer is unbearably hot and winter can often be too cold and windy.
path to Cala Goloritzè

Getting there
By plane: fly to Cagliari, Olbia or Alghero and then hire a car.

By car: take one of the numerous ferries from Genova, Livorno, Rome or Naples to Olbia. From Olbia take the highways SS125 and SS131 southwards towards Nuoro. Exit before Nuoro following signs to Dorgali. Shortly after this town a signposted road leads left through a tunnel down to Cala Gonone (approx. 100km, 1.5 hrs). Baunei is reached via the winding SS125 from Dorgagli in about an hour (50km). For ferry information visit either www.mobylines.com or www.corsicaferries.com

Food and accommodation
Wild camping is strictly prohibited in the National Park, but the municipal campsite in Cala Gonone is prohibitively expensive! Rooms or apartments can easily be found by asking around - expect to pay between Lit 20-25.000/head. There are small supermarkets in Cala Gonone and Baunei, while to the north of Olbia there is an enormous out-of-town shopping mall.

Guidebooks
The Gennargentu, which has many more areas than just the four sea cliffs mentioned in this article, is covered by Maurizio Oviglia's excellent "Gennargentu Ultimo paradiso". It is published in Italian/English and costs Lit 28.000.

Sardinia offers much more than sea cliffs within this National Park: routes of all length, grade and rock type have been set up to the north, the south and inland. Those interested in discovering these gems should consult Maurizio Oviglia's "Pietra di Luna", an extensive, though not updated, guide to the entire island.
Alternatively, have a look at his website under www.sardiniapoint.it/sardiniaclimb

Thanks
to Maurizio Oviglia, Lorenzo Nadali and Marcello Cominetti for route information, photos and drawings. Cominetti's website can be viewed under cominetti.tripod.com/