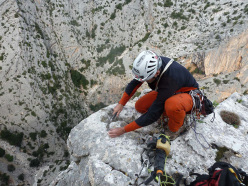 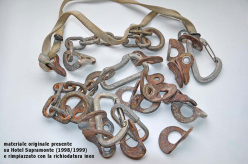 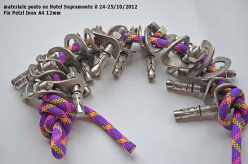 Maurizio Oviglia reports about the recent rebolting of the famous rock climb Hotel Supramonte. Established in 1998/99 by Rolando Larcher and Roberto Vigiani, Sardina’s famous multi-pitch has now been restored to its former glory by Larcher and Oviglia, with the new stainless steel bolts placed (obviously) in exactly the same place as the original ones.

They say that masterpieces are immortal and timeless, but obviously this isn't true and they too suffer the effects of aging. What would Leonardo da Vinci have thought if, still alive today, he noticed some cracks appear on his Mona Lisa? Would he have tried to fix it or just leave her to her fate?

I apologise if this comparison is a bit far-fetched but Rolando Larcher, one of the first ascentionists of one of the most famous and beautiful multi-pitch sport climbs in the world - Hotel Supramonte in Sardinia's Gole di Gorroppu - frowned when he heard about the state of many of the route’s hangers. Widely regarded as a true work of art, the route's original galvanised gear had become rusty.

I willingly accompanied him during his May 2005 redpoint (just like I had done during the first ascent of pitches 2 and 3) and at the time the gear seemed OK, but in recent years he’d received more and more reports of climbers who had laconically stated nothing more than "the gear's not that great..." So in 2009, for the route's 10th anniversary, Rolando wanted to celebrate by reequipping the entire line with stainless steel bolts, but turning words into action is no mean task... in short, it's not easy to quickly plan such a large undertaking and, above all, find someone willing to work hard for a route which isn't even "his"! Rolando believed that there are few routes as difficult to reequip as Hotel, due to its location and the fact that it's so overhanging... But finally in 2010 Rolando received sponsorship from Petzl and found a partner, his brother-in-law Michele Cagol. The two planned to walk to the top and then abseil down the route yet, as many know, Hotel doesn't finish at the top of the face, but on a rocky crest, 200m from the true summit... After an hour's trek they reached the summit but Michele injured his leg and couldn't continue. They stashed all the (heavy) gear in a hole and reluctantly returned home.

A season passed by but Rolando, increasingly determined, failed to return. Until I stepped in and agreed to give him a hand (I'd already taken part in the first ascent and the redpoint, all that was missing now was to rebolt it!). It was October, the days were short and with only 12 hours of daylight there was no time to lose! On day 1 we reached the top at 8.00am, after a 1.5 hour approach, but we then needed a further 4 hours of difficult scrambling with really heavy rucksacks to reach the route's last belay. After working for 5 hours as perfectly as possible and thanks to our good old Ryobi drill, Rolando managed to rebolt the last 6 pitches. What remained were the first 5 pitches, the most overhanging ones, but night had fallen. The only way to sleep at home and not spend the night in a hanging bivy was to tie the two 60m half ropes together and do a 120m abseil down into the void, past the knot in the middle. Frightening, but necessary...

Just before dawn the next day we were back at the fixed ropes, which seemed more like chewing gum than anything else, but we had no choice but to ascend them. With a fair few anxieties and hard work. Another 8 hours were needed to bolt the first 5 pitches, hours of intense effort for Rolando and never-ending waits at the belays for me, interspersed with monstrous pendulums to remove the quickdraws, with the constant thought in the back of our minds that darkness was about to set in and that Rolando's aeroplane was about to set off.

In the end, at five o’clock and after having placed the last bolt and with our feet firmly back on the ground, we quickly gave each other a hug. Not because of yet another new route, but because we'd just restored a work of art which doesn't belong to Rolando or Roberto - the two legendary first ascentionists - but a bit to everyone. Contributing to its restoration wasn't merely a question of friendship, but also an honour...

Perhaps Hotel Supramonte hasn't shaped the history of alpinism like the Marmolada Fish route has, but it has certainly left its mark on multi-pitch sport climbs. It is a beautiful, visionary line, located in a stupendous setting, where every bolt placed is the result of sweat, courage and hard work, established by fully respecting the most rigid ground-up first ascent ethics. This is why Rolando decided to place the new bolts in exactly the same position as the old ones and he therefore simply substituted the gear, chopping the old bolts and filling the holes with sikka. Yet another masterpiece!