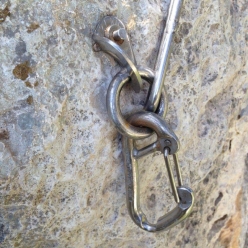 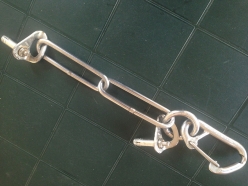 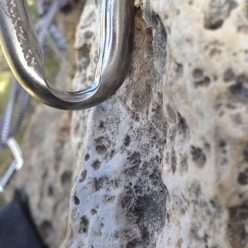 Swiss climbers Louis Piguet, who has shown a particular interested in the problem about replacing rusty anchors and corroded AISI 304 stainless steel bolts, continues his titanic work of re-equipping the marine crags along Sardinia’s coastline.

In a previous report I provided details of routes that Louis Piguet had rebolted, in the meantime he has continued to substitute old bolts and he would like to share this information with others. As is well known, Piguet concentrates primarily on easier, more popular sectors rather than difficult routes. As he himself points out, prior to developing new marine crags it would be wiser to rebolt the existing ones. And Piguet, there can be no doubt, demonstrates what he believes in through his actions. Piguet’s report is published below (Maurizio Oviglia).

Pranu Sartu (Buggerru): I have completed rebolting the multi-pitch climb Litri e litri di vino cattivo, one bolt (stainless steel) on the first bolt snapped when I weighted it (!). The entire route has now been re-equipped, with abseils starting from the summit in order to avoid traversing from Riflessi Magici below...

Cala Fuili east beach (Cala Gonone): all belays were reequipped with Marine quality stainless steel bolts (LPi June 2016)
the following routes have been re-equipped entirely with marine quality stainless steel bolts:
- Manga (17. not named in the guidebook Pietra di Luna) 5a 20m
- Zia Lillith
- Spigolo Fuili (compare the photo of the anchor on the rock, to the photo of the anchor subsequently removed! The bolt had not expanded and would have pulled outunder an axial load!)
- Porto io i nuts
- Mad Max (finish direct to new belay)

Cala Fuili Settore Petit bateau (Cala Gonone):
- Nesquik: French belay has been substituted as it was deemed too dangerous for this type of sector!l! (check out the photos!) It has been substituted with marine quality stainless steel belay. (June 2016)
- a maillon rapide & and stainless steel ring have been added to the upper part of the French belay, as this was less worn than that of Nesquik! (routes from 57 - 60)

This type of belay can work well for routes that are not too popular. But an intensive use, as in the Petit Bateau sector (more than 15 teams of climbers/day!) the upper anchor is stressed too much and wears down quickly! Furthermore, the lower sideways resined anchor provides doubtful resistance to the torsion!

The same holds true for worn carabiners, as can be seen in the attached photos, they wear in the same point and become extremely dangerous! Personally I have preferred freely rotating rings as these rotate and hardly ever wear. (Louis Piguet)