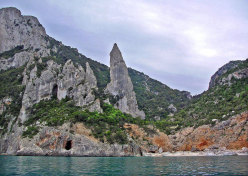 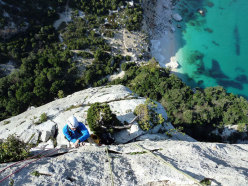 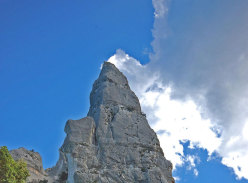 Maurizio Oviglia and Gianluca Piras have reequipped the climb Easy Gymopedie and the abseils down the route Sole Incantatore on Aguglia of Goloritzé (Sardinia). The report and video by Maurizio Oviglia about their restyling of one of the most beautiful towers in Italy and further afield. This monolith was climbed for the first time in 1981 by Maurizio 'Manolo' Zanolla and Alessandro Gogna via Sinfonia dei mulini a vento and this route remained untouched.

For a number of years the Baunei town council and I had discussed reequipping the belays of the most famous tower - along with Campanile Basso and Campanile della Val Montanaia - in Italy. Despite the council's good will and awareness about this issue, unfortunately the necessary funds were never found to completely rebolt all the routes. In the light of recent problems associated with stainless steel I became convinced that this was worth doing nevertheless, at least the belays of the most popular climbs, if only to reduce the risk of an accident which would almost certainly result in closure of this earthly paradise, as has happened in the past.

For this reason I purchased the extremely expensive hangers with twin stainless steel 316L rings for the rappel stations and I confided with Gianluca Piras, certainly one of the most prolific and generous new routers in Sardinia. As it happened, both he and I had had the same idea and he had already begun to collect some gear! This happens rarely, it's not often that new routers work on the same project. And rarely do they share their ideas and intentions. But this time, aware that at stake was a heritage of inestimable value (the Aguglia) and safety of numerous climbers from all over the world we decided to join forces.

Thanks to the important contribution of Georock Sardinia and the Castiadas Sardinia Sports Project club which has now also become a climbing gym we filled our rucksacks to the brim with this extremely expensive, shiny stainless steel and headed down to the Aguglia. Both Gianluca and I have climbed this tower at least 20 times and as we climbed up Easy Gymopedie (the easiest and therefore most popular route), we noticed that some bolts were almost completely out of place and we therefore substituted them. We also added some bolts on some easy sections and removed some dangerous, loose rock.

When we reached the top we substituted all the belays down Sole Incantatore - Sun Charmer - one of the most popular routes in the Mediterranean. With clippers we cut through old maillon rapides (some of which were almost completely worn through), rusty chains,  corroded galvanized bolts, old tat and even pegs. Seeing that the Aguglia is located close to the sea and bearing in mind that these abseil stations are used extremely frequently, one of the solutions we preferred was to make the abseil station with three bolts and with two rotating rings since it's been demonstrated that, over time, carabiners and maillon rapides become worn out.

In any case, we highly recommend that during the abseils you never clip into just one point of contact which is not connected to another. In the end, despite an unfortunate mishap shown in my amateur video below, we managed to finish the job and reequip the belays of the two most popular outings. We'll return shortly to substitute all the old rusty hangers on the upper section of Sole Incantatore and perhaps also sort out the summit book which has become soaked through and is completely useless... but highly sought-after by those who reach the top; some, who didn't have a pencil, etched or even signed their names in blood!