Adam Ondra pointing to the East Face of Monkey Face at Smith Rock, USA, and the route Just Do It
Photo by Bernardo Gimenez 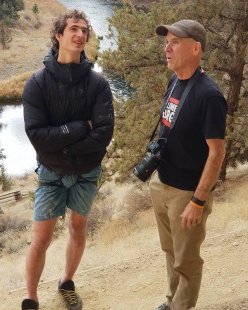 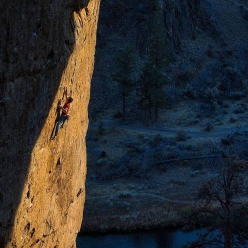 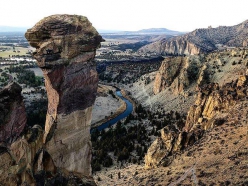 Czech climber Adam Ondra has made an onsight ascent of Just Do It, the first 5.14c (8c+) in the USA located at Smith Rock, freed by French climber Jean-Baptiste Tribout in 1992.

Adam Ondra has onsighted Just Do It at Smith Rock in the USA. This isn’t yet another 8c+ climbed in the purest style possible by the 25-year-old, but one of America's most iconic sport climbs. The route is an endless stamina test up the East Face of Monkey Face, envisioned and bolted back in 1989 by Alan Watts and freed in April 1992 by an on fire Jean-Baptiste Tribout who had travelled specifically from France to establish the hardest route in the country and, at the time, one of the most difficult sport climbs in the world.

Six years earlier, in 1986 therefore, the Parisian had made the first ascent of another project bolted not without criticism by Watts, the famous To Bolt Or Not To be; the name a defiant provocation towards those who were against bolting climbs on rappel, as Watts was endeavouring to do. To Bolt Or Not To be was the first 5.14a (8b+) in the US and this degree of difficulty caught the American climbers off guard, but with his Just Do It, 31-year-old Jibé took things one stage further still, creating a monstrous test of stamina and technique that was later defined as "one of the most influential routes in the history of American free climbing." Paige Claassen checked in with the coveted first female ascent in 2014.

Ondra reached the park in Oregon the other day, after having unsuccessfully attempted the main objective of his US road trip, namely to onsight the Salathé Wall on El Capitan in Yosemite. The Czech climbed revved his engines by repeating Assassin, the 9a established by Drew Ruana in 2016, and onsighting the classics Chain Reaction, Dark Side of the Moon, Scarface (8b+) and White Wedding (8b +). Only To Bolt Or Not To be required a second attempt. Yesterday Ondra pulled off his incredible onsight of Just Do It, despite the intense cold on the east face. For the record, this is Ondra's 20th 8c+ onsight. Add to this his other three 9a onsights and the world’s only 9a+ flash. Now that’s food for thought.

INTERVIEW: Alan Watts, the climber who played a leading role during the 1980's in developing Smith Rock into one of the most famous crags in the USA and the world.

Just Do It is such a iconic route, bolted by Alan Watts 1989, first ascended by JB Tribout in 1992. The first 5.14c (8c+) in America, taking the middle.part of East face of Monkey Face. Extremely stoked to have done it today in the best style possible - onsight. @montura_official @blackdiamond @lasportivagram @mytendon @gardatrentino