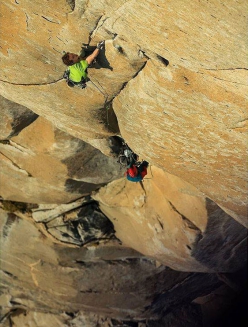 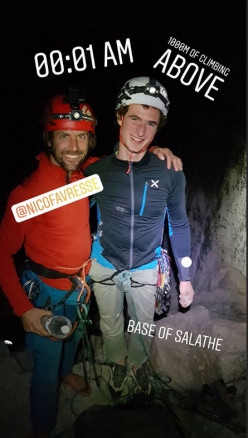 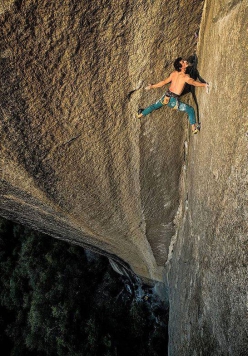 Czech rock climber Adam Ondra has attempted but only just failed to onsight the Salathé Wall on El Capitan in Yosemite, USA.

Adam Ondra has failed to onsight the Salathé Wall, the legendary big wall climb on El Capitan first ascended by Royal Robbins, Chuck Pratt and Tom Frost in a ground-breaking and uncompromising style over nine and a half days in September 1961.

Onsighting what is recognised as the most logical and in many respects beautiful line up the Big Stone is considered the Holy Grail of big wall climbing, and so far no one has succeeded in this feat. The bar was set incredibly high over 20 years ago by Yuji Hirayama, when the Japanese climber blazed up the nigh 1000m route in 1997 to fall only twice, on two of the seven 5.13 pitches. Hirayama - the first climber ever to onsight 8c - still regards this monumental effort as his greatest climbing achievement of all times and his thoughts are echoed by none other than Lynn Hill who, in our 2002 interview, defined his attempt as "... absolutely spectacular, and I regard it as one of the best performances of this sort."

Ondra travelled to Yosemite this autumn specifically with this project in mind and warmed-up, so to speak, with a smooth second-go ascent of one of the best corner climbs in the valley, Randy Leavitt’s single-pitch 8b Book of Hate, with an onsight of the 8a crack line Cosmic Debris (5.13b/8a, Bill Price, 1980) and a fast repeat of the Chris Sharma V13/8B boulder problem Dominated (2002).

After a short rest Ondra teamed up with Belgian El Cap expert Nicolas Favresse and started yesterday at 00:01 am. The duo made swift work of the climb, reaching the Boulder problem at 7 am, the Block Ledge 700 meters off the ground at 8:30 am. Ondra onsighted his way through the famous Enduro Corner that led him to the most famous pitch of all, the Headwall, but it is here that his dream ground to a halt: he fell on the upper section of this pitch, and on his second attempt he fell right below the anchor.

Commenting after his ascent, Ondra stated "Salathe was a dream of mine for a long time. A dream of just being up there, feeling the air and exposure of the "headwall" (upper part of Salathe which is the crux), putting my hands into perfect cracks... And to onsight it. Some dreams came true yesterday, but the ultimate - the onsight is not fulfilled. And the nature of onsight is that it will never be fulfilled any more. It is only one try,  lots of pressure in case of such a legendary route like Salathe in Yosemite on El Capitan."

During his first visit to Yosemite valley in 2016 Ondra made first repeat of Dawn Wall in an 8-day push. Prior to this he attempted to onsight The Nose with his father and although they topped out in a day, Ondra junior had taken three falls on the Great Roof and one on the Changing Corner. It wouldn’t be surprising if he now tries to climb Salathe free and then sets his sights on the Nose. Especially since this - the most famous big wall in the world - is currently celebrating the 25th anniversary of the first free ascent, carried out by Lynn Hill in 1993.

The Salathé Wall
First ascent: Royal Robbins, Chuck Pratt, Tom Frost, 1961
Length: 870m (35 pitches)
Grade: 5.13b 8a/8a+
First free ascent: Todd Skinner and Paul Piana swinging leads, 1988 . In June 1995 Alexander Huber became the first to lead all pitches free, adding one offwidth pitch to avoid a  5.13b pitch above the Ear, and a 5.13a variation between E1 Cap Spire and the Block to avoid a wet crux.
One of the all-time monuments to free climbing, the Salathé is perhaps the most logical big wall up El Capitan. Every pitch has its own story to tell and, as always in Yosemite, has its own name. Every pitch is legendary. And marked by good belays. Normally the route is climbed by ascending the first 10 pitches to the Mammoth Terraces to then abseil to the base via the Heart Ledge before continuing the ascent the next day.

15.03.2017
Royal Robbins, goodbye to America's legendary climber
On 14 March 2017 American rock climbing pioneer Royal Robbins passed away. Aged 82, Robbins was one of the best American climbers during the ’60’s and ’70’s, the period known in "Golden Age"" of Yosemite Valley climbing. Robbins was a pioneer and advocate of clean climbing, i.e. without pegs and expansion bolts, and one of the most vocal proponents of the need to protect the rock and environment.