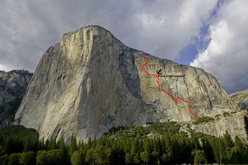 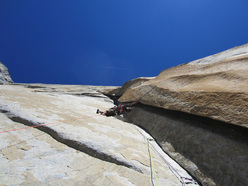 Nico Favresse repeated The Salathe Wall before exploring a new line up the right-hand side of El Capitan, Yosemite together with Sean Villanueva.

Nico Favresse has had a fairly productive autumn in Yosemite. After repeating The Salathé Wall, ground-up, leading all pitches and belayed by his girlfriend who... had never climbed a big wall before (!) right as Mayan Smith-Gobat carried out her ascent, he turned his attention to the right-hand side of El Capitan where together with Sean Villanueva he set off on a mission to explore a new route.

Climbing ground-up in typical Favresse - Villanueva style, the two spent six days following what they describe as an obvious line from the meadow, "a huge traversing feature that goes crosses a pretty big part of that side (it crosses about 15 different routes!)"

Favresse and Villanueva managed to climb free to about 2/3 height with difficulties up to 5.13a but were then stopped by a completely blank section, which forced them to traverse left and finish up the aid line Iron Hawk, first ascended by Ron Kauk and Dale Bard in 1978 and graded A4 5.10. Of the 25 pitches, only one is completely new while new short sections were added to connect the existing route.

Asked about the crux Nico replied "After the 5m of blank rock we just focused on on exploring different possibilities, so we stopped trying to redpoint. Anyway, those upper pitches on Iron Hawk are very hard to free, maybe even impossible, but we have to get back to explore more. Finding the free path, if there is one, is very tricky but we're psyched to come back for further exploration!"