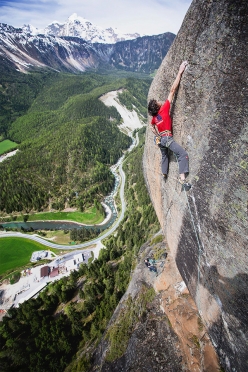 On Nösslachwand in the Ötztal, Tyrol, Austria, Hansjörg Auer climbing together with Thomas Scheiber has made the first free ascent of 'June Afternoon', a new multi-pitch sports climb with difficulties up to 8b/+.

Hansjörg Auer has made the first free ascent of June Afternoon, a new multi-pitch sports climb up the Nösslachwand rock face in his home valley, Austria’s Ötztal. Auer had established the climb nine years back but his sporadical attempts were thwarted by the bouldery first pitch. This has now been freed at 8b/+ but, more importantly than the overall difficulties, is the beauty of the fifth and final pitch, an 8a Auer describes as one of the most beautiful in the entire valley.

Nösslachwand hosts a series of other multi-pitch sport climbs, all far easier obviously, ideal for spring and autumn. And cool June afternoons.