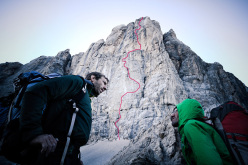 Austrian climbers Hansjörg Auer and Much Mayr have made the first free ascent of L'ultimo dei paracadutisti (8b+, 750m), the superb route established by Mariano Frizzera, Paolo Leoni and Graziano Maffei up the South Face of the Marmolada, Dolomites.

News short but sweet: on Friday 24 August 2012 Hansjörg Auer and Much Mayr succeeded in making the first free ascent of L'ultimo dei paracadutisti on the South Face of the Marmolada, Dolomites. Located on Punta Penia, the route was established in 1988 by Mariano Frizzera, Paolo Leoni and Graziano Maffei over a six day period and has gained somewhat of a reputation due to poor protectction and A4 difficulties, so much so that it has no reported repeats.

Auer and Mayr started working the line in summer 2009 but then abandoned their attempts due to poor weather, which stopped play in the successive two summers. This August they worked the route for a further five days prior to their redpoint, which required 12 hours and the two swinging leads on all but the hardest pitches, which both led free first go with difficulties up to 8b+.

It's worth noting that while circa 25 pegs were added - in particular at the belays - to render the route a somewhat safer undertaking, in its 750m the line contains no bolts at all. A full report will follow shortly about this ascent which is important to say the least.