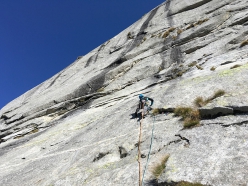 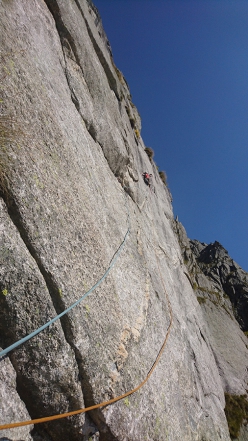 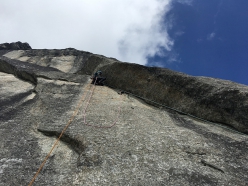 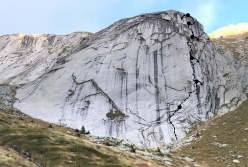 Last year Martino Quintavalla and I walked into the upper Val Qualido to make the first free ascent of Fiori nei Cannoni on Escudo del Qualido. It was during one of these visits that Martino's trained eye noticed some unclimbed rock on the righthand side of the wall. We promised ourselves we’d return to try and add a new route to the magnificent Escudo formation.

Last October we spent four days spread out over four weekends to establish El Despertador Fotonico. Climbed ground-up with trad gear where possible and otherwise equipped with 10 mm stainless steel bolts and abseil rings at the belays, this is a beautiful and varied route up excellent rock past beautiful slabs and a difficult finishing corner.

The route owes its name to the alarm clock, which punctually woke us up at 5am on each of the four weekends spent establishing and freeing the climb.

We recommend a repeat in autumn in order to enjoy, just as we did, the warm and peaceful ambient provided by autumn up in the mountains.

16.05.2019
Val di Mello: agreement reached for contested path for the disabled
After months of controversy concerning a planned expansion in Val di Mello, Italy, of an existing path that would make it accessible to wheelchairs and the disabled, an agreement has now been reached to protect the pristine valley. The peaceful protest scheduled for Saturday 18th May has therefore be transformed into a celebration for all.

10.10.2016
Mongolfiera in Val di Mello: the video of Pana
The video of Pana (8b, 300m) the new multi-pitch sports climb established by Simone Pedeferri and Daniele Bianchi up the huge and secluded Mongolfiera cliff Val Masino (Italy).