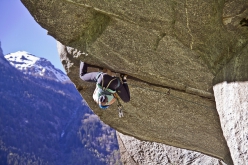 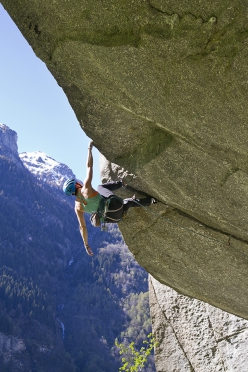 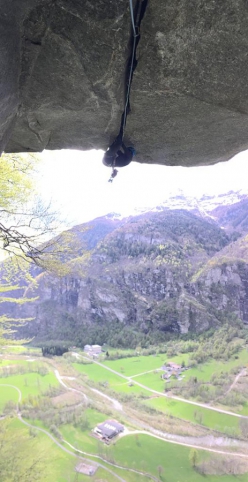 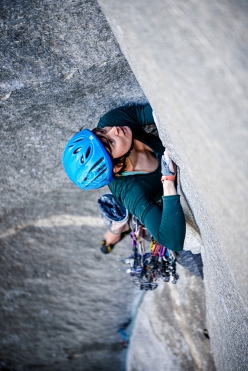 Italy’s Caterina Bassi has made a rare ascent of Turkey crack, the burly offwidth that cuts across a steep roof above the middle tier of Cadarese in Val d’Ossola in Piedmont. Freed by Belgian climber Sean Villanueva in 2010 and graded 8a, the climb has received precious few female ascents - Caroline Ciavaldini in 2016 and Barbara Zangerl in 2017 are worth mentioning - and, truth be told, it actually gets very few clean ascents from anyone. Since there are few women in Italy operating at this trad climbing level, Bassi’s ascent struck us as being all the more remarkable. Especially since, as Bassi herself points out, she has always viewed this crack as the emblem of impossibility.

My first time at Cadarese, one of Europe’s premier crack climbing destinations, dates back to 2014. Due to my poor climbing skills at the time I vividly remember that my first impression was terrible: the climbing just felt really insecure and I struggled desperately to figure out the moves.

Nevertheless, I really liked this different style and above all the absolute beauty and purity of the lines. Over the years therefore I’ve occasionally returned to Cadarese and my initial hostility and distrust for this style of climbing (which in truth I often still have) has slowly given way to the joy of discovering something new, coupled with the satisfaction of doing routes which at first had seemed absolutely impossible.

For me though Turkey Crack represented the emblem of Impossibility. A year and a half ago I belayed my boyfriend Martino Quintavalla on this roof split by a perfect crack, and since my ideal style is technical face climbing, the mere idea of ​​hanging upside down with my legs stuck deep in the crack was absolutely repulsive. So at the time I didn't even give it a go.

During the last year and a half though I’ve tried to work on my weaknesses as much as possible and last autumn, after having climbed the very physical 7b+ offwidth Impossible Crack in Val Masino, I felt ready to try Turkey Crack.

Given the size of my hands, it was impossible for me to climb it with fist jams and so I had to resort to using the Wide Pony technique, which consists of stacking two hands and then placing your legs to the left and right before shuffling along. During my first attempts I tried to become familiar with this technique and with the sensation of hanging upside down off my legs stuck deep in the crack. Initially, progressing just 50 cm without having to rest proved really satisfying! Then, after three days of attempts, I finally managed to send Turkey Crack and I came to the conclusion that it is probably easier for a woman, since having small feet is a big advantage when you have to have wedge them into the crack!

Although generally speaking crack climbing continues to resemble a very complicated puzzle, sending Turkey Crack proved to be a very personal and fleeting victory against some of my inner fears: the fear of climbing upside down, the fear that some parts of my body might remain irretrievably trapped in the crack, the fear of burly climbing that provides very few rests and requires quick thinking, and the fear of dealing with situations beyond my comfort zone.

13.04.2013
Tom Randall climbs hard at Cadarese in Italy
British climber Tom Randall has onsighted the 8a crack climb Turkey Crack at the Italian crag Cadarese. Today he repeated the famous route The Doors.