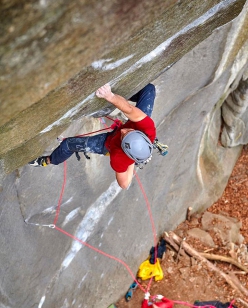 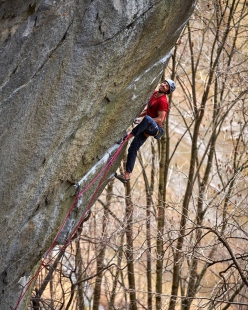 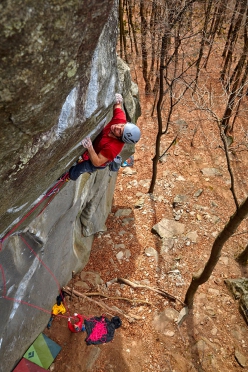 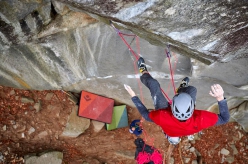 Jacopo Larcher and Tribe, his most difficult trad climb at Cadarese / Interview

Interview with Jacopo Larcher after his first ascent of Tribe at Cadarese, Italy on 22 March 2019. The Italian rock climber defined the route as 'the most difficult thing I’ve ever climbed'.

Last Friday Jacopo Larcher finally completed the first ascent of Tribe, his colossal trad project at Cadarese in Val d’Ossola, Italy. For the 29-year-old South Tyrolean this route represents not only "the most difficult thing I’ve ever climbed" but also, and above all, the end of an odyssey that began 6 years ago when he first started to delve into the trad climbing game. This venture took Larcher from the rudimentary basics of climbing with nuts and friends to cutting edge trad repeats as well as huge big wall ascents, and over the years he has rapidly transformed into one of the most versatile climbers in the world. Tribe, with no fixed gear and climbed while placing all pro on lead, stands as testament to Larcher’s vision, ability and evolution as a climber.

Jacopo, congratulations once again! Tell us a bit about how this route came about
Well I actually first saw it the very first time I went to Caderese. You can’t miss it as you walk up to the crag, it’s right there in front of you, a really obvious, exposed arête and as I walked past it Riky Federer told me "You should try this." At the time I was only just getting into trad climbing, I’d just returned from a climbing trip to the Reunion Island and had realised that I wanted to find out more about this facet of rock climbing. So that evening I cleaned the line and tried the moves.

And?
I didn’t understand a thing! The moves all seemed impossible, more importantly through it just seemed really, really dangerous. But with time and thanks to the experience I gained on other trad climbs around the world I realised that it wasn’t actually as dangerous as I had first thought.

For those who don’t climb trad routes on a daily basis, can you explain a little more?
I reckon hard trad routes roughly fall into two categories: technically not too difficult but with poor pro and therefore highly dangerous, and, conversely, very difficult technically but with fairly safe pro. Tribe falls into this second category.

Meaning?
The first part is fairly dangerous, with some random moves and dubious pro, in the region of 7a+ where you’re better off not taking a fall. Higher up there are two crux sections, both with bomber gear though. On the first roof you risk falling badly and on a couple of occasions I fell with the rope behind my leg and slammed into the rock and hurt my wrists. On the second roof the fall is longer but more straightforward. That’s why I’d define Tribe as technically difficult but fairly safe. Having said that, if you fall while going for the ledge at the end and if the pro doesn’t hold, then you risk taking a huge whipper. Luckily I didn’t try that though.

You defined it as an odyssey
Yes, well that first time I saw it dates back to 6 years ago, although I started trying it seriously 3 years ago, after La Rambla at Siurana in Spain and Gondo Crack at Cippo in Switzerland. Before that I’d try it in summer, or during the classic Cadarese seasons autumn or spring, but I soon realised that I’d need far lower temperatures. In winter though the crag seeps. I’d make progress, but then the season would come to an abrupt halt and I’d have to stop and wait. One winter I trained really well, but then got injured and had to spend time recovering. When last autumn arrived I’d spent the summer climbing long mountain routes, when I finally got back into decent shape it started to rain…Before the first drops fell though I managed to make a first lead attempt, and this gave me the right motivation to train properly and wait for conditions to improved.

How did that first attempt go on the live end of the rope?
Well I had never managed to do the crux move, so I knew I wouldn't succeed, but the attempt went really well. I thought I’d be afraid to be on the lead, but I quickly realised that I felt completely at ease. Trying it on lead was my way to change the way I was approaching the route, because attempting a trad route on lead is completely different from when you try it on toprope, everything changes. The fact that I immediately felt at ease really motivated me. I’d say that was a first breakthrough moment.

And the second ...
The second breakthrough was when I managed to work out the crux moves on the second roof. I knew that from that moment onwards I’d be able to try the route on lead, and even though I never managed to climb it all without a fall on toprope, I started trying on lead. I reckon I made about fifteen attempts in total on the live end of the rope, one last season, all the others this season.

After the tough crux at the end there’s a delicate rockover and then, true to Cadarese, a great crack to finish with.
Yes. At first I thought I’d end the route halfway up the comfortable ledge, it’s so big you could even lie down so in some respects this would have been a logical finish. Above though there’s a beautiful 7b crack which, when I first started trying the line, was bolted. In the past there have been lots of controversy at Cadarese regarding trad climbs and sport climbs and I absolutely didn’t want to rekindle these arguments. One day I noticed that the bolts had disappeared: Maurizio Pellizzon, the first ascentionist, had removed them on his own initiative to ensure that my route would be completely trad. I found this really beautiful, touching almost. Something like this can’t be taken for granted and I really need to thank Pelli for this.

Just a few minutes after your successful first ascent you told planetmountain.com that you knew the route so well, you were unable to give it a grade. Four days have passed since then, you’ve had time to think about it and you’ve decided not to give a grade. Can you explain why?
First off: freeing this route was immensely satisfying, in many ways the climb represents the transformation and evolution of me as a climber. If you bear that in mind, perhaps you can understand a bit why I got a bit upset when the first question I heard from many was "how difficult is it?" I don’t want the importance of this climb to be represented - and in some ways diminished - by simply a letter and number. In doing so one loses sight of thing which are far more important, such as its beauty, or the overall experience one gets when trying to climb it. These things risk being overshadowed by a grade. I don’t want to be taken for what I’m not, it’s clear that grades are important, but they’re not the only things that matter. On the route I gave everything I had, it’s the most difficult thing I’ve ever done and it’s beautiful line, completely natural. Honestly, I couldn't have asked for more.

Last question therefore: what’s to the name Tribe?
The route really made me feel part of a group of people. Part of the group of Cadarese climbers, a small circle of friends who share the same vision. I have to thank them all. And actually, I also have to thank the many, many climbers who wrote and congratulated me from all over the world. This participation was fantastic, it took me by surprise and I think it's one of the really great things about our sport. In the end we are a beautiful tribe. Irrespective of the grade.