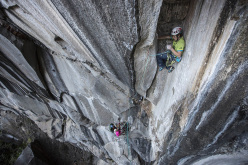 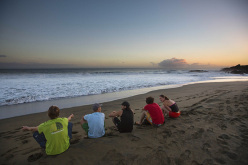 A strong international team of climbers comprised of Caroline Ciavaldini, Sam Elias, Yuji Hirayama, Jacopo Larcher and James Pearson have just completed a 3 week trip to the Reunion island in the Indian Ocean where they established a flurry of new routes, the highlight being the multi-pitch Zembrocal (140m, 8c+).

This 140m high, seven pitch outing breaches the previously unclimbed wall of La Chapelle at Cilaos and was forged ground-up over an entire week and is protected by a mix of trad gear and bolts. While the route is now in pristine condition, the first ascent was rendered complicated not only by seemingly blank sections up the basalt face, but also by questionable and often dirty rock. "Our aim was to climb ground-up and always place a a bolt wherever we rested on aid." Pearson explained "However, what we found was a wall with a lot of very dirty cracks full of mud, that would climb very well on trad, but only when clean. Opening was usualy spent climbing a few moves, sitting on gear, cleaning as far as we could reach and climbing a few more moves. The idea of placing bolts whenever we rested on gear didnt really work, or we would have ended up with loads of bolts next to perfect finger and hand cracks!"

All the pitches of Zembrocal were freed individually - Hirayama remarkably fired the crux 8c+ pitch on his last attempt on the last day on the island - but a one day free ascent is still outstanding. Pearson commented "Establishing the route and making it both clean and safe was A LOT of work, and very, very scary, but with the help of our amazing international team and a good dose of luck, we were able to open and free climb what now stands as one of the hardest multi-pitch routes in the world, and certainly in that style (mainly protected by trad gear).

The trip to Reunion island was particularly relevant to Ciavaldini as this is her childhood home and where she first started climbing. Zembrocal and the other new trad lines are certainly interesting additions to as island which according to Ciavaldini already "offers plenty of sport climbing and bouldering".