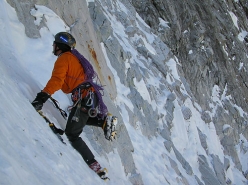 PORTFOLIO / gallery Portfolio: Ueli Steck first anniversary of his accident in the Himalayas

Ueli Steck first anniversary of his accident in the Himalayas

Remembering Ueli Steck, the great Swiss alpinist who perished a year ago on Nuptse (Himalayas, Nepal).

A year has already passed since that 30 April 2017. At the time we didn’t want to believe it, nobody wanted to believe it. And yet Ueli Steck really had gone away forever. It happened on Nuptse, the big and difficult mountain close to the giants Everest and Lhotse. Ueli was acclimatising, alone, in preparation for an incredible project: the Everest - Lhotse traverse that would have led him via the Hornbein Couloir to the summit of Everest before descending to the South Col and continuing on from here straight up to the summit of Lhotse. Obviously - in his case it seems superfluous to underline - without supplementary oxygen. An undertaking for someone on another planet. In short, something from Ueli Steck, certainly one of the world’s greatest modern mountaineers. His list of climbs proves this. As does his way of interpreting mountaineering at "full speed" and "difficult", not necessarily in order to set yet another record (read Eiger, Matterhorn and Grandes Jorasses) but above all because in was in his nature, his rhythm. It was his way of mountaineering and expressing himself in the mountains. Images of him climbing the North Couloir on the Drus suffice to comprehend (and also to be enraptured by his natural ability and skill).

Ueli left us aged 40. He will be remembered in the history of mountaineering for his solo (and always fast) ascents in the Himalayas and the Alps. He will be remembered for two Piolet d'Or. The first, in 2008 for the new route forged with Simon Anthamatten up the virgin North Face of the Tengkangpoche (6487m). The second for the extraordinary solo climb up the South Face of Annapurna in 2013. Ueli’s was certainly a life lived intensely. Doing what he wanted to do, more than anything else in the world. He was a champion of mountaineering. But today we wish to remember above Ueli the man. That youngster who so many years ago told us that his dream was “a 4000m face, on an 8000er… A face where there’s a bit of everything: rock, mixed, ice. And I dream about climbing it towards infinity, climbing and moving perfectly, joyfully. It’s beautiful…" We miss the man who bid us farewell before setting off on his last expedition. And we miss his smile and his sincere helpfulness. Yes, we miss Ueli a lot!

03.05.2017
Ueli Steck's dream
We have republished an interview with Ueli Steck we carried out in February 2006 at the Piolet d’Or award, for which the Swiss alpinist had been nominated for his solo enchainment of Cholatse, Tawoche and Ama Dablam.

10.10.2013
Ueli Steck summits Annapurna, alone up South Face
Yesterday Ueli Steck soloed the South Face of Annapurna (8091m) Nepal, Himalaya. Currently there are no further details, apart from the fact that the Swiss alpinist is already back in Base Camp.

01.06.2005
Ueli Steck - absolute void
Ueli Steck and his solo ascents of Cholatse and Tawoche in the Himalaya, in the words of Christine Kopp .