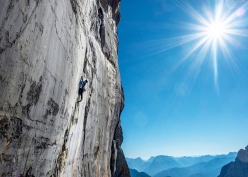 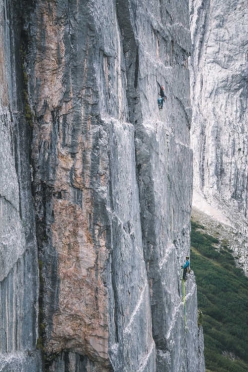 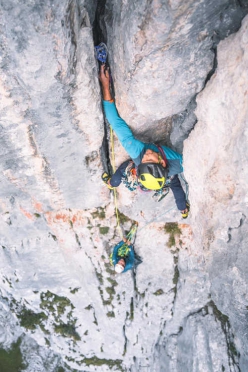 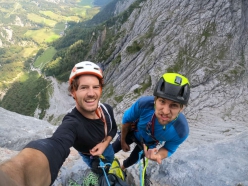 Martin Sieberer reports about his repeats with Hannes Hohenwarter of Locker vom Hocker on Schüsselkar, Tschechenplatte in the Karwendel and Pumprisse in the Wilder Kaiser. Three classic limestone trad climbs in Tyrol, Austria, climbed one day after the next, and reached by train and bike.

Pumprisse, Tschechenplatte and Locker vom Hocker. Three limestone trad crack classics located in Tyrol. The routes many climbers dream of. Our goal was to climb all three routes, in three consecutive days, by fair means and onsight. Since the climbs are located in different mountain ranges, we'd use trains and bikes to get around.

We are both aspirant mountain guides and passionate climbers. For this project many factors had to be perfect: our mental and physical fitness had to be on point in order to free climb all three routes. And for that, the conditions of the walls had to be just right.

In September 2020 we decided the time had come to start our adventure. We began with Locker vom Hocker in the Schüsselkar. First ascended in 1981 by Wolfgang Güllich and Kurt Albert, this UIAA VIII graded route is recognised as being a trad masterpiece. After the long approach, the first pitch awaits with a thin crack that is hard to protect. This is followed by a hard slab pitch, after which the difficulties diminish. Both of us managed to climb the route onsight, what an awesome start!

After the descent we jumped on our bikes and rode for 30km and about 1000 vertical metres into the Karwendel massif. Our next objective was Tschechenplatte: a natural beauty, put up by J. Novak, P. Krupka and Jan Ďoubal in 1979 and freed in 1984 by Heinz Zak. Much to our regret the wall was totally damp and the first crack pitch completely wet. After one fall on the first hard pitch we’d blown the onsight, so we then focused on redpointing all pitches. We managed to climb all pitches free but felt quite pumped and exhausted at the exit.

Time flew by and we were already on to our final destination: the legendary Pumprisse in the Wilder Kaiser, the first grade VII route, established in 1977 by Helmut Kiene and Reinhard Karl and universally recognised as a free climbing testpiece. We reached the Stripsenjochhaus hut after sunset after having travelled by bike, train and on foot.

Worn out from the previous climbs, yet we still had to overcome the last hurdle. On the first pitch we both took a huge whipper. Fortunately the #4 Cam is a bomber. We soon managed redpoint this pitch and open the gates towards the tip. We onsighted all other pitches and reached the summit totally wasted but incredibly happy with our achievement.