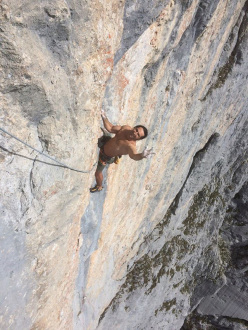 On 30 September 2015 Alexander Huber and Guido Unterwurzacher made the first free ascent of Südwind (X, 250m) a new multi-pitch rock climb up Maukspitze in the Wilder Kaiser massif in Austria.

Over a period of two days in October 2014 German rock climbers Alexander Huber and Guido Unterwurzacher made the first ascent of Südwind, a new alpine sports climb up the compact limestone slabs of the south face of Maukspitze, the easternmost summit in Austria’s Wilder Kaiser massif. The 250m "southern wind" were freed on 30 September this year with difficulties up to X. According to Huber, the extremely compact nature of the rock doesn’t take any additional trad pro, a for a repeat you need "only an excellent feeling for the rock and a bit of courage."

So we were lucky once again, Guido and I. This was practically our last chance to free Südwind this autumn. Last autumn Guido and I had made the first ascent of this beautiful line to the right of Südpfeiler, but time ran out for the first free ascent and we had to put things off to a later date.

After the Karakorum expedition this summer I returned to the Wilder Kaiser this September and slowly but surely got fit enough for a grade X alpine outing.

I fell off the last IX pitch a week before the free ascent, I’d ran out of energy and was lacking a bit of substance. But on 30 September things fell into place. The right level of aggressiveness was there, as were my energy levels and Guido and I teamed up for Südwind.

It was really windy that day, in the beginning we were unsure as to whether it might even be too cold, despite the sun. The southern wind looked like it would bring snow. But in the end it turned out to be a fantastic day, the grip was sensational.

Nine, ten minus, eight plus, ten, nine but above all completely demanding technically. Power alone won’t get you anywhere Südwind!

04/11/2008 - Alexander Huber interview
Interview with German climber Alexander Huber, one of the world's most important sport climbers and mountaineers.