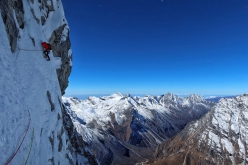 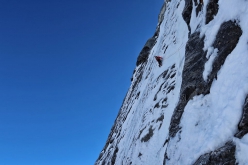 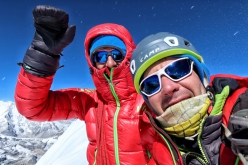 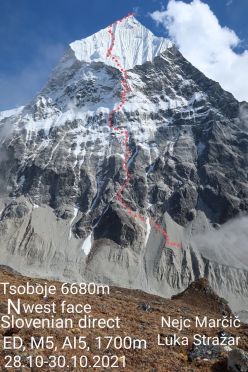 Climbing alpine style from 28 - 30 October 2021, Slovenian alpinists Nejc Marčič and Luka Stražar established a new route up the NW Face of Tsoboje (Chobutse) above the Rolwaling Valley in Nepal.

Top Slovenian alpinists Nejc Marčič and Luka Stražar have made a clean, alpine-style ascent of the NW Face of Tsoboje, the stunning 6,686m peak the towers above the Rolwaling Valley in Nepal. Also referred to as Chobutse or Chobuje, the mountain was first climbed in 1972 via the NE Ridge by the Germans Wolfgang Weinzierl, Peter Vogler, Gustav and Klaus Harder. In 2015 Mingma Gyalje Sherpa made an impressive solo ascent of the West Face, but the colder NW Face is an entirely different proposition.

Marčič and Stražar left Slovenia at the start of October along with Marko Prezelj and Matija Volontar and after acclimatising properly despite poor weather, Marčič and Stražar climbed the mountain’s NW Face from 28 to 30 October. They encountered steep, exposed climbing in the central part and despite unfavorable terrain they found two really good bivy spots.

The climb was accompanied with low temperatures and strong winds, creating frequent spindrifts. To avoid any confusion due to small height difference, the party climbed both the central and east summit of Tsoboje. They rappelled and descended the southern side of the mountain and reached base camp the evening before their planned return to Kathmandu.

Prezelj and Volontar for their part attempted a line up the mountain’s south face, but were were forced to turn back due to the aforementioned high winds.

09.11.2012
Janak West Face, first ascent in the Himalaya by Marcic and Strazar
The Slovenians Nejc Marcic and Luka Strazar have made the first ascent of Blue Racer (80°, M4, 1100m), a new route up the virgin West Face of Janak (Himalaya).

26.10.2009
Bhagirathi new routes for Prezelj, Blagus and Lindic
In September the Slovenians Rok Blagus, Luka Lindic and Marko Prezelj climbed three new routes in the Bhagirathi group located in the Gangotri region in the Indian Himalaya.

29.01.2007
Piolet d'or 2006 awarded to Prezelj and Lorencic for Chomo Lhari
On 26 January 2007 Marko Prezelj and Boris Lorencic from Slovenia were awarded the "Golden ice axe" for their new route on Chomo Lhari. Pavle Kozjek was awarded the Spectators Choice for his new route climbed solo up Cho Oyu. This was the 16th edition of the mountaineering award, created by the French Montagnes magazine, to honour the best mountaineering achievement of the previous year.
17.03.2006
Prezelj's Patagonian ascents with Koch and Potter
Slovenian alpinist Marko Prezelj has returned from a five week trip to Patagonia where, dodging typical unstable weather, he made two fast ascents together with the Americans Stephen Koch and Dean Potter, one on Cerro Torre and one on Torre Standhardt.