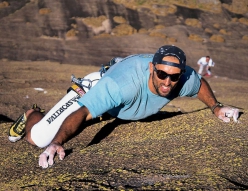 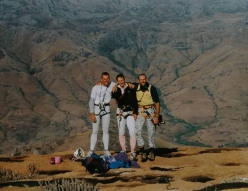 Erik Svab, Marco Sterni and Rolando Larcher on the summit of Never the same - Mai più così, the first climb on Tsaranoro Atsimo in Madagascar
Photo by archivio Rolando Larcher 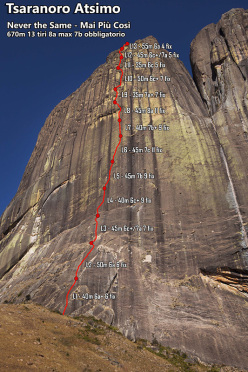 20 years have passed since the first ascent Madagascar's Tsaranoro Atsimo, one of the most popular rock faces in the world for big wall climbing. Back in September 1998 the Italians Rolando Larcher, Marco Sterni and Erik Švab free climbed their way up the peak, reaching the virgin summit via their Never the same - Mai più così. In agreement with the local population, they called this summit Tsaranoro Atsimo (south). To celebrate the 20th anniversary, here’s the original film documenting the expedition and climb which was finally climbed free in 2015 by Andrea Polo, Gabriele Gorobey and Carlo Giuliberti.

11.11.1998
Madagascar 1998 climbing expedition
Never the same, a new rock climb up the granite Tsaranoro Be in Madagascar.

24.08.2017
New Tsaranoro climb in Madagascar by Italian Ragni di Lecco
In July 2017 the Italian climbers Matteo de Zaiacomo, Dimitri Anghileri and Marco Maggioni belonging to the Ragni di lecco climbing club made the first ascent of Rivotra Mahery (strong wind) a new 700 meter rock climb with difficulties up to 8a+ on Tsaranoro Atsimo in Madagascar.