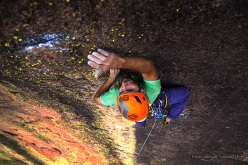 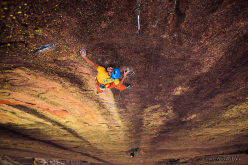 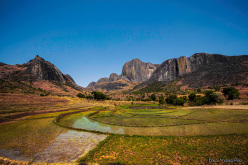 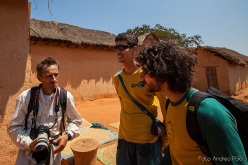 Never the Same, first free ascent on Tsaranoro Atsimo in Madagascar by Polo, Gorobey and Giuliberti

Andrea Polo, Gabriele Gorobey and Carlo Giuliberti retrace this September’s first free ascent of Never the Same up Tsaranoro Atsimo in Madagascar. The three were accompanied by Marco Sterni who, in 1998, had made the first ascent of this multi-pitch rock climb together with Rolando Larcher and Erik Svab.

If it’s true that things will never be the same again, just as they are now, then it’s equally true that this September Marco Sterni relived moments very similar to those he had experienced 17 years ago, together with Rolando Larcher and Erik Svab. Back in 1998 these three Italian climbers forged a line up an unclimbed peak in Madagascar’s Tsaranoro massif, at the time a granite paradise still in its embryonic stage that subsequently, over the next two decades would attract almost all of the world’s elite. Back then the trio spent five days on Mai più così - Never the same, their new route up the East Face of Tsaranoro Atsimo that offered intricate climbing and, above all, was established using a rigorous and exemplary first ascent style. The expedition was a success, its only regret being having run out of time to free the crux pitch. For the last 17 years this section plagued Sterni, until he suggested to Andrea Polo, Gabriele Gorobey and Carlo Giuliberti that it might go free after all…

Before reading Sterni’s introduction and the trio’s trip report, we simply wish to point out that "Madagascar 1998" was the fifth news in our database, we’d only recently decided to abandon static pages written largely by hand in html, and even if we’d been online for two years, the internet and digital era was still in its infancy. Yes, things will never be the same again.

NEVER THE SAME 1998 by Marco Sterni

Madagascar, Tsaranoro Atsimo, "Never the same", 1998, a great story but possibly slightly overshadowed by my desire at the time to prove something, overshadowed by my fear of not living up to the expectations of my climbing partners.
Madagascar, Tsaranoro Atsimo, "Never the same", 2015, a pure story, fantastic and clear right from the outset.
This time, the first for me (sigh… Sigh.. SIGH!) however I was only as a spectator. For various reasons I am no longer able to climb as hard as I used to and I do not wish to receive any merit for this free ascent, other than having been the one who had the idea in the first place.
I experienced superb times while climbing this peak back in ’98, this year I sat back and enjoyed the show, watching my partners climb and, at the same time, reliving the excitement of those days gone by.
So it’s up to my friends to talk about their latest adventure.
Thanks Andrea, Sbisi and Carlo. Your exceptional talent aside, thanks for these truly special moments and the the fantastic… "young" experience I had with you.

It’s from this pleasant introduction in pure Sterni style that we’d now like to talk about our great trip to Madagascar! Those who know Marco also know that he’s a man of few words, someone who prefers to let the facts speak for themselves (those who don’t know him probably guessed as much from his short intro above…) so it’s up to us, Andrea, Sbisi and Carlo, three climbers who belong to the social network generation, to tell this nice story… Yes, we reckon it is a story, a true story of course, rather than a report about climbing results. All those reading planetmountain.com in search of 8c+ onsights and 9a redpoints be warned, what comes next probably won’t quench your thirst for numbers…

This story begins in 1998, when the team comprised of Marco Sterni, Erik Svab and Rolando Larcher travelled to Tsaranoro, in south-eastern Madagascar. The number of climbers who’d set foot on this remote corner of the world could still be counted on one hand. The goal was to climb something new and they opted for the East Face of Tsaranoro Atsimo, 670 meters of untouched granite. Apparently by no means easy, at least, from below they’re seemed no easy way up. Those who followed climbing chronicles in 1998 know that their expedition concluded with the first ascent of Mai più così, which translates into Never the Same, the first route up Atsimo. Even by today’s standards it is considered a demanding outing, due to the technical climbing so typical of the Tsaranoro granite, and due to the first ascent style, which demands that between one bolt and the next, you really need to know how to climb. Their teamwork paid off, the trio alternated pitches and all three managed to free climb at least the pitches they had opened. Only the hardest pitch, put up by Marco, wasn’t freed by a hair’s breadth. Time had run out, skin was trashed and down on energy the three returned satisfied with what they had achieved.

The idea of climbing that 8th pitch free continued to bug Marco and, over the years, his desire grew to return and deal with this unfinished business. Those of you who often climb at the weekends know how much a pitch you’ve come close to reappointing can play on your mind... During the week you remember all the holds and crux moves and you can’t wait to give it another go… Well all this becomes infinitely more complicated if the pitch is located 300m off the deck, on a face on the other side of the hemisphere... Which mean’s that some year’s passed before Marco got the opportunity to try it again. Perhaps, as he himself said, a few years too many to be a main player, but certainly not too late to accompany three rock-starved youngsters keen on finishing off what was started 17 years ago.

The four of us departed on 17 September for Antananarivo, on the 19th we stood below Never the same. We climbed during the successive three afternoons and reached the crux. The sun was blazing hot and so we waited for the shade to creep across the wall and the warm wind to pick up. We didn’t have a portaledge (sigh!) so we fixed some static ropes and jumared up these every day before continuing the climb. We reckon the climbing on Tsaranoro is unique for two reasons: the compact nature of the face, which for 700 meters provides practically no ledges at all, and the background music coming from the forest below. The beauty of the crux pitch was the icing on the cake: a smooth overhanging bulge, cut by a single line of crimps that leads to the crux, a sequence of 6 tiny crystals that need to be crimped to death to get established on the slab above. All three of us sent this pitch on our second attempt, first Sbisi, followed by Andrea and Carlo. We were excited and satisfied, for having freed the demanding pitch (solid 8a for those who loves numbers) in an absolutely unique location, and also for having finally settled the score and achieved the main objective of our trip. The following day we climbed the upper section of the route and reached the summit of Atsimo: difficulties eased off somewhat, max 7a+, but the longer run-outs between the bolts kept us concentrated and on the ball.

After a day of rest to recharge our batteries and, above all, to give our skin some time to heal, we decided to attempt the route in a single day. Conditions didn’t make life easy as the shade arrived late and it got dark at 18, but we thought that perhaps by climbing the first pitches in the sun and taking a couple of headtorches with us we might stand a chance… Andrea was the chosen one, because he knew the pitches well and also because his skin wasn’t completely trashed. Carlo accompanied him. Everything ran smoothly, Andrea climbed flawlessly, sending the final two pitches guided by the beam of his headtorch and at 19:00 Marco and Sbisi back in the campsite received the victory SMS! We couldn’t have been happier and the time had now come to turn not be more pleased that we feel it's time to turn over a new leaf and try a different challenge! There are plenty to choose from at Tsaranoro…

We spent a day repeating Out of Africa, the beautiful route on Tsaranoro Kely and classic of the area, after which Marco bid farewell and returned to Trieste. We still had five days before our own departure and the route that grabbed our attention most was the recently established Fire in the Belly on Atsimo, put up in August 2015 by Sean Villanueva and Siebe Vanhee.

We knew that with the few hours of shade we’d get and the few days left, a ground-up ascent was out of the question. And we also knew we were a team, so we decided to carry out a team ascent, where every pitch had to be climbed free by at least one of us. The pitches were split as follows: Andrea P1, P2, P3, P4, P5 and P10, Sbisi P6 and P7, Carlo P8, P9, P11 and P12. The two crux pitches were real gems: P7, a compact face with a boulder problem right at the start on incredibly hued rock, send by Sbisi on his second attempt. P10 offered something completely different: 50 meters of intricate and technical face climbing where excellent footwork and finger strength are key. In their report Siebe and Sean mentioned P10 as being 8a++ ... After the first attempt we understood why!

Over the next four days and with the use of static ropes we reached the summit. All pitches were onsighted except for P7 and P10 (hats off to Sbisi for the beautiful 7c on P6!). On our summit day we we descended to the start of P10 since this still needed freeing. We slept on a small ledge that the wall generously offered on this section. The next day was going to be our last. Our skin begged for mercy and our energy had run out, yet Andrea sent the pitch on his third attempt! All that remained to do was descend, celebrate and prepare for our return.

On 5 October we set off for Antananarivo, bidding farewell to this incredible peak and loads of great people. We also left behind a beautiful adventure, the first of this magnitude for all three of us. We felt as if we’d somehow managed to thank Marco for the opportunity he’d given us and, in repeating of Fire in the Belly, we’d taken things one stage further. We returned safe in the knowledge of having learnt something important, and with good end to a story that had made us dream, which is why we’re so happy to share it with you. Now, from a distance, all that remains is to think about the next adventures and, who knows, sooner or later we might return to Tsaranoro ... but with a portaledge!