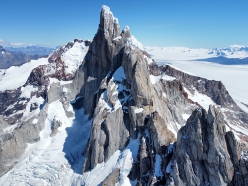 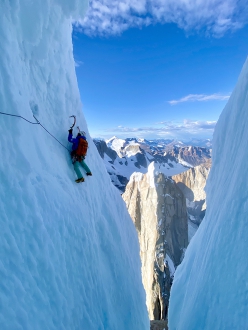 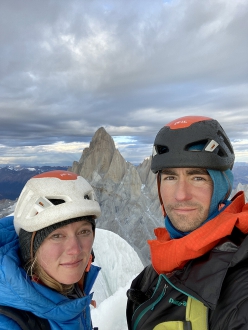 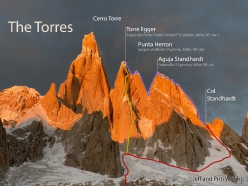 This trip in January 2022 my husband Jeff and I spent 11 days Seattle-to-Seattle, summiting and traversing Aguja Standhardt, Punta Herron, and Torre Egger (three of the four summits of the Torre Range). As we boarded the plane, we didn’t even have firm plans, flipping through the pages of Rolando Garibotti’s Patagonia Vertical guidebook while on the flight to Buenos Aires. Our primary objective was to summit Torre Egger, but since the weather window was so big, we wanted to summit Cerro Standhardt and traverse over Punta Heron as well.

Jeff and I had previously been to El Chaltén four times to climb. In 2019, we watched Patagonian weather forecasts every day from our home in Seattle, USA, waiting for a big weather window, then we rushed to Patagonia successfully climbing Fitz Roy in 10 days Seattle-to-Seattle. We were not watching the weather this year, but when Rolando Garibotti posted that a huge weather window was approaching, we were on a plane flying to El Chaltén within 48 hours. Jeff and I love the "Smash and Grab" style, because we both have full time jobs.

Our traverse from Standhardt to Egger took four days and three nights, with two bivouacs on Standhardt and then climbing through the third night up-and-over Torre Egger.

We chose the route Festerville along the North Ridge of Aguja Standhardt (400m, 6c, 90°, about 13 pitches) put up by Timmy O’Neill and Nathan Martin in 2000, on the plane ride. We took this long rock climb since the standard Exocet route (an ice chimney) was not in condition. Unfortunately, we did not bring the large cams required for this route, so we gratefully borrowed some cams from climbers in town.

After arriving in El Chaltén and staying the night at the Aylen-Aike hostel, we hiked in to Niponino and camped, leaving our tent and bringing only a tarp and double sleeping bag for the traverse. We encountered a party who bailed from Festerville due to icy conditions while we bivied another night on the Torre Glacier.

We started up Aguja Standhardt on January 18, climbing Festerville along the spine of the north ridge. Another team of two (Michał Czech from Poland and Agustín de la Cerda from Chile) started up the route ahead of us, and we climbed near each other along the way and bivied together on a ledge, 11 pitches up. The next day we summited Standhardt via two more pitches and 30m of 90° ice and rime. Michał and Agustín rappelled the Exocet route while we bivied near the summit.

In the morning, we made seven rappels down the south face of Standhardt, then climbed 30m of ice up the route Tobogán to gain the Col de los Sueños. The traverse continued up to Punta Herron via Spigolo dei Bimbi (350m, 6b 90°, Adriano Cavallaro, Ermanno Salvaterra and Ferruccio Vidi), with five pitches of fantastic rock climbing and another two pitches of beautiful vertical ice and rime to the summit. A single rappel led down to Col de la Luz under the north face of Torre Egger. Spigolo dei Bimbi has some of the most beautiful rock climbing we have ever done in Patagonia!

From Col de la Luz, we continued up Thomas Huber and Andi Schnarf’s route Espejo del Viento in the dark (200m, 6a+ 80°, first Ascent 2005, often simply known as the Huber-Schnarf route). Three rock pitches end in a long, run-out and wet technical slab traverse under Torre Egger’s overhanging summit mushroom. We continued through the night, climbing two more moderate pitches up the mushroom on 70° rime ice to the summit of Torre Egger at 2:00 am, becoming the first people to summit the peak this season.

We continued through the night without a bivouac, descending the route Titanic on the east pillar, with 27 rappels and down-climbing. We touched down on the glacier as it began to rain snow. Upon reaching our tent at Niponino after 44 hours of continuous movement, we realized that we would not make it back to town in time to catch our shuttle, so we collapsed into our tent.

Unfortunately, we neglected to notify anyone that we would miss our early-morning airport taxi ride, which led to the driver waking climber Korra Pesce, who was sleeping in the room we had previously used. Korra notified Seba, the hostel owner and Rolando Garibotti, who proceeded to notify rescue teams. Later that morning, however, Rolo successfully contacted us via our inReach, halting any rescue plans and teaching us a valuable lesson.

We were grateful to Korra and Rolo for getting everything set up for a rescue if needed, unfortunately it was Korra who would be needing the rescue the following week. A large team of volunteers attempted an unsuccessful rescue of Korra Pesce, when he was seriously injured on Cerro Torre. Jeff and I were already back in the United States but wished we could have been present to aid in the rescue efforts. Korra will be greatly missed.

01.02.2022
Adieu Korra Pesce
Corrado 'Korra' Pesce, the Italian mountain guide known as one of the strongest climbers of his generation, lost his life on Cerro Torre in Patagonia.

30.01.2022
Corrado Korra Pesce perishes on Cerro Torre / The climb, accident and rescue attempt. By Matteo Della Bordella
The El Chalten mountain rescue has announced that there is no longer any hope of finding Corrado 'Korra' Pesce alive. The Italian mountain guide was hit by rock and ice high up on Cerro Torre along with his Argentine climbing partner Tomás Aguiló. Matteo Della Bordella (who with David Bacci and Matteo De Zaiacomo climbed another new route at the same time and who, together with his partners, shared the upper section of the route with Pesce and Aguiló) reports about the ascent, the accident, the rescue of Aguiló and the attempt to rescue Korra.

18.12.2021
Alpine Vagabonds - a climbing sabbatical
A recap of the sabbatical climbing year of American mountaineers Priti and Jeff Wright and their ascents of some of the most famous mountains in the world.

06.11.2020
K6 Central first ascent in Pakistan by Priti and Jeff Wright
American alpinists Priti and Jeff Wright made the first ascent of K6 Central (7,155m) in the Karakorum in Pakistan on 9 October 2020, a day after making the third ascent of K6 West (7140m). The Wright’s report about their impressive alpine style ascent that required 8 nights and nine days on the mountain

11.05.2015
Cerro Torre, the Traverse and Thomas Huber's infinite dream
The video of the attempt carried out by Thomas Huber, Andi Schnarf and Tommy Aguilo to complete the Torre Traverse in Patagonia via the mountains Cerro Standhardt, Punta Herron, Torre Egger and Cerro Torre.

04.02.2008
Ermanno Salvaterra, the Torre traverse and the future of mountaineering in Patagonia
After Rolando Garibotti and Colin Haley's successful linkup of the Torre traverse (Aguja Standhardt, Punta Herron, Torre Egger and Cerro Torre), Ermanno Salvaterra offers insight into the history and the dream of the traverse and his vision of the future of mountaineering in Patagonia.